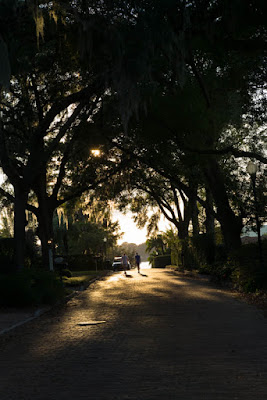 All I have for pictures from the Leica M 262 are the lame things I took the first day I got it, just test shots.  I opened them in Lightroom this morning, though, and I love the look of them coming straight out of the camera.  They don't need much post-processing at all.  As a matter of fact, most of the post-processing I did made them look worse.  The image I posted here is a difficult shot for any camera, high contrast, shooting into the sun.  It was sunset on a brick street leading to a lake in my neighborhood.  It almost looks enchanted.  And in reality, it is.

But. . . Jesus, sweet Jesus, I have a confession.  When I opened the files today, I saw the pictures I took with the Leica Monochrom and. . . dare I say it?. . . I lusted for another Monochrom.  Nope.  Not kidding.  I may have to sell a bunch of stuff and get one.  A bunch of stuff.  My stuff.  Stuff I love.  It will have to be camera things.  I think I know what goes first, and second, and third.  First, of course, I will sell the Fuji that Q has lent me.

But I am not disappointed in the M 262.  It is a fine and good camera.  I'll tell you the truth, though, that others won't.  It is a documentary camera and nothing more.  What I mean is that it is not very good for creative stuff.  Most other cameras will give you more tools for that.  Leicas are simply what they are.  Take them with you, look at them, hold them, and let other people ooo and ahh.  But their purpose, honestly and truly, is limited.

Am I glad I spent the money?

I'll forget about the money one day.  Right now, I need to take some real pictures with it.

I hope someone will buy me the Monochrom for Christmas.

I am embarrassed, though.  Not by what I want, but by that meretricious photo.

Now, buried deep in the post, I will opine about something.

The election outcome wasn't effected by the Russians.  Give me a break.  Nobody voted against Hillary because she ate dead babies at a Pizza restaurant.  Are you shitting me?  They voted against her because she was Hillary.  That is it.  Trump didn't win the election.  The democrats lost it.  Maybe 25% of the people who cast votes for Trump were truly for Trump.  He appealed to morons, and seriously, morons are a smaller portion of the population than what I tell you when I'm being hyperbolic.  The greedy rich may have  voted for him, but there aren't that many of them, either.  Trump is very, very unpopular, but there was one person on the ballot that was even more so.

Why are people acting surprised that the Russians were hacking accounts and spreading fake news?

"Oh, my!  What sort of people are these Russians?"

We're all in favor of that sort of thing when we do it in the name of democracy.  We like drone attacks until other people do it.

That's what makes us better than them.

Whatever.  I'm sick of it all.  We're screwed no matter what happens now.  Take Trump out and we have Pence.  And all around the globe, countries are electing their own versions of Trump, and we are going to have to deal with that reality, too.