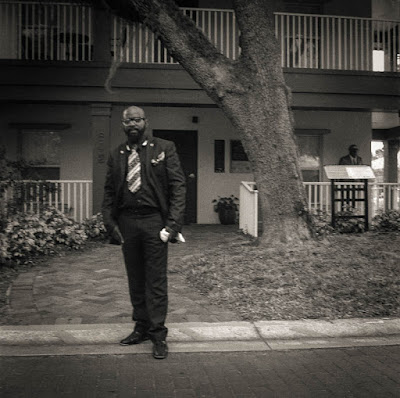 It is winter here.  The first day.  Cloudy, moist and cooler.  I woke still under the influence of a wizardly concoction.  The day could be almost melancholy.  I'm O.K.  I don't mind.

My first full day of vacation was good and right.  There was the morning pot of coffee, then gym.  Then there was a big breakfast and another pot of coffee.  Ili followed me to the car wash where I left my car for a full-buff and wax detailing.  The expensive one.  The hideously expensive one.

It was time for a nap.  I was out as soon as my head touched the pillow.  A nice long sleep and Ili's insistent gentle waking.  The clouds had passed.  The phone rang and the answering machine (yup, I still use one) picked up.  A mechanical voice was already pitching.  I got it mid-sentence--"Already approved.  Press one to receive your package postage free.  Did you know that one in five Americans over 65 die from falling?  Your next fall could be your last. . . ."

I looked at Ili for a moment then choked out, "Jesus!"  She was already giggling.

The farm being an Irish pub up the street.  I told her earlier that we could go play darts.

I moaned and got out of bed and dressed.  Since it was nice, we decided to take the scooter.

An Irish pub at four on a workday is pretty empty, but the people who were there were all around the dartboards.  And that consisted of three men in suits and ties.  Ili and I don't play darts and don't know how to play darts, but she is quick with the Google and soon we were playing a game that wasn't supposed to take long.  The object was to move around the board hitting numbers 1-20.  We got two of the big pints of Guinness for our health.

Just before we started, another couple walked in.  I don't remember him.  She was short and dusky with bangs swept dramatically across her forehead, tight jeans, high heals, and a tight shirt that showed her figure cut at the belly.  She was really a figure.  The three guys in suits were thrilled.  I, however, had a girl who was equally pretty if dressed like a hippie rather than a girl ready for her Maxim photoshoot.  I like both things, but I knew where I'd better keep my eyes.  Hanging out with women is not like hanging out with guys at all, in case you wondered.  And so, I turned my attention to the dartboard where I figured I'd be an athletic natural.

She looked up another game while I snuck peaks at the girl.

The bar was lovely in the late afternoon, and people began to drift in.  But the music was beyond beautiful, all Christmas music, all things I'd never heard.  On our way out, I asked the barmaid what the music was.  Brad, the bartender, had made a Hipster Christmas station on Pandora.  Hell, yea!  Good old Brad.

Ili got a Pandora account on her phone right away and looked for Hipster Christmas.  The music wasn't as good as Brad's, but we told it what we liked and didn't, and by nightfall, we were chilling.

When I had taken my car into get it detailed, the woman who rang me up got flirty and said, "Remind me to tell you a story after I ring you up.  With this new manager, I have to pay attention to everything.  He's a real asshole.  With him, if I fart in your car I have to charge you."

"I'm not sure that's the scent I'm picking," I giggled.

"O.K." she said, "So I work at another carwash by my house once a week, and there, you have to go around the building and through some doors to pay.  So I was ringing this old man up, and I said to him, 'Go on through the back door.'"

As she said this, she arched her back and jacked her thumb over her shoulder.  Then she looked me in the eye and started laughing.

She loved telling me the story.

By the time I picked up my car, it was turning dark.  Somehow, somewhere, I told Ili would could ride the scooter to another part of town for Taco Tuesday.  She wanted to see the Christmas lights in the neighborhood.  The air was still warm enough, I thought, and put on a light jacket.  Oh, mother of god, though, that was not enough.  The temperature was dropping and the air was moist and cut right through my little denim jacket.  I wished I had a wool cap.  I felt a shiver.  I got lost.  We drove around in circles in the maze of neighborhood streets.  I was delirious.  I was already dreading the drive home.  Behind me, though, Ili was fine.  As I made wrong turn after wrong turn, she kept pointing.

At home, I tried to warm up.  I grabbed a scotch, but remembered we were going to make some medicinal tea, so I backed off a bit.  We put on Hipster Christmas and set the tea water infused with butter to boil.  Later, on the deck, under a low cloudy sky, we drank the bhang chai and giggled our way along.

And that was the first full day of vacation.  There will be another. . . and another.

The photo at the top of the page is Charles.  His girlfriend was taking a phone picture of him as I walked by with my Rolleiflex.  I held it up.

He was down for that.  Then his girlfriend took a picture of the two of us together with her phone.  I had no idea what they were about, but Charles gave me his phone number.  I will send him his picture today.

Time for a little music of the season.