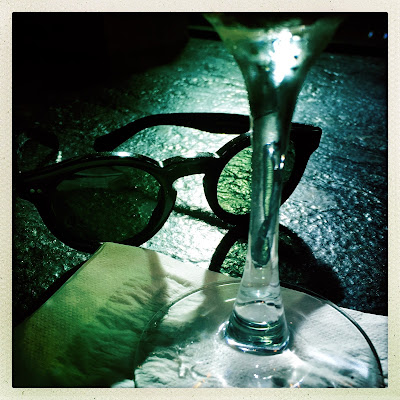 I was pretending to be on vacation all weekend, but I knew that Monday I would have to make one more trip to the factory.  I had a meeting I couldn't skip.  I woke up feeling grumpy, then ill.  Nothing was clicking for me.  I couldn't focus.  My stomach was bad.  I couldn't stop sweating.  My nerves were frayed.

The traffic was bad.  As the population grows here, the geniuses at the Department of Bad Fucking Traffic have decided to set all the lights to red.  My way to work is now done in quarter miles.  That's the distance between lights.  The winner of the Goering Award for Traffic Control is a sick, twisted little shit whose fuck of a republican Christian mother has kept him deep in the closet his whole life where he spends his time biting the heads off lizards and listening to the Pat Boone Basement Tapes.  He won't be happy until their are shootings.

When I got to work, I was jagged.  I said hello to the bosses secretary, or rather, she said good morning to me as I grumbled some anti-greeting.  I had made it just in time for the meeting.

But. . . when I got to the consultant's room, she did not have me scheduled.

"If you'll just have a seat. . . she'll be with you shortly," one of the assistant's said.  I sat down to wait, but after ten minutes, I couldn't take the insult.

The look on the assistant's face was fun.

I sat down at my desk and tried to do some work.  I have a "self-appraisal" that is past due.  I opened the questionnaire.  My jaws clenched.  Nope.  Nope.  Nope.

"I'm sorry, we didn't have you scheduled, but if you can come right now, I can squeeze you in."

By the time I left the factory, I just wanted to go back to bed.  I had not slept well the night before, waking to look at the clock every miserable hour.

When I got home, I tore off the factory clothes and told Ili, "I don't have to put on that shit until next year.  Are you hungry?  Let's go for lunch."

She wasn't hungry.  She had just eaten.  But she saw me.  She knew.  She could tell.

Shorts and a t-shirt and a camera and a Vespa.  Fuck yea.  Let the holidays begin.

We went to a good restaurant on the Boulevard and sat at the bar.  Two drinks and a wahoo sandwich.  The morning had been shit, gray and warm and drizzly, but the clouds had cleared now, and though the sun was hot, the air was crazy with light.

I drank the first drink gingerly, waiting to see if my stomach would rebel.  A delicate salad.  The sandwich with wahoo steaks an inch and a half thick.  A second drink.  It was a miracle.  I felt better.  More than better.  Salvation was upon me.  I'd been healed!

It is always surprising how many people don't work.  I mean, it was a Monday, mid-afternoon, and the beautiful people were milling about like it was Saturday.

"What the fuck?" I exclaimed to Ili.  "This just goes on all the time?"  I was being disingenuous, though, for I know what goes on while I sit at my desk in the sterile office under the strips of greenish Xenon lights.  On every Boulevard in every city in every country of the world, there are people sipping beers or drinking bhang tea and eating sesame cakes, chatting and watching the parade go by.

Now it was my time.

We climbed onto the Vespa parked outside the restaurant.  Ili wanted to take back some dungarees she had bought at the little hipster market on Sunday.  She had the address of the store from where they came.  I felt great.  The air sparkled.  We made our long, slow way to the other side of town.  Ili was excited.  It was a place she'd never been.

Of course, when we got there, the store was closed.  Why would it be open?  It was Monday!  No matter, though.  The day was glittering and we were beautiful, so we cruised slowly through neighborhood streets toward the big downtown area where we knew a place that would serve us beer under big umbrellas. 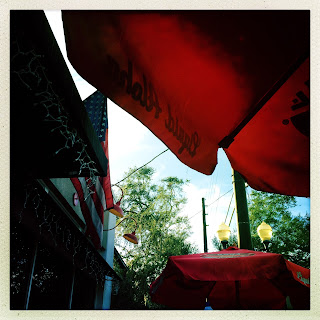 "Fuck work.  I'm done.  I'm never going back.  All I want to do is go through the world and meet people and take pictures and tell stories.  I'd be good at that, don't you think?"

She was simply happy that I wasn't grumpy any more.

"Let's make a journal together now," I said.  "We'll get a notebook and put the pictures we take in it and you can decorate the pages with watercolors and colored pencils and we can write stories around them and between them and in the margins.  We'll make beautiful notebooks.  They will be envied."

There is no end to the things you think you can do on a beautiful afternoon when you've escaped the gallows, when you are full of food and drink and the light sparkles and shines. 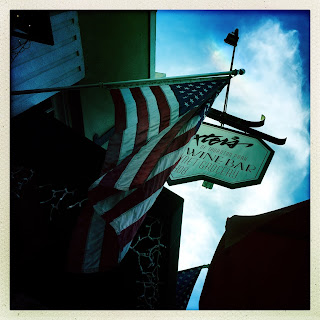 We made it home as the sun was sinking.  There was an entire night before us.  We would make a garbanzo bean/edamame/feta and red pepper salad.  We would make a delicious chicken soup from the stock I had saved from Sunday's dinner.  We would do face masks of raw organic honey, milk, and ground turmeric powder.  We would hydrate our skin with coconut oil and watch something wonderful on t.v.

As one of my preferred anti-heroes once said, "Isn't it pretty to think so."
Posted by cafe selavy at 7:18 AM