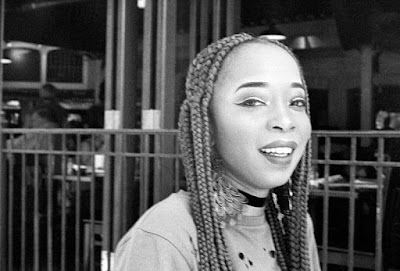 I don't know--just some girl in the street walking by while I was waiting for a friend to show up for brunch.  It is part of a little story, I guess.  There were three of them, one with a camera, and two made up.  They were shooting pictures for their fashion site, a Twitter feed.  That's what this girl told me.  Well, now, I said, isn't that something.  They were friendly.  I had my camera as I've pledged to do, though I have not lived up to the "shoot every day" part of it.  I had to force myself to walk over to them, though they remarked me sitting on my Vespa when they came by.  It hurt like a bad fever ache to pull my camera out and approach them.

"I want to take pictures, too," I said in a sing-song voice.  I had my cool-ass film Leica, so of course they couldn't resist.  But the pictures I took of them say nothing, really.  The story isn't told in the photographs.  This one is just a picture of a girl.  It will be more interesting ten years hence when viewers will note how odd people used to look.

Like some of you, I've burned down to the very quick.  There is too much to do too often.  I just want days and days and days of leisure.  I want to be able to say something that is more meaningful in words or pictures, and I can't do that if I am always "busy."  And science backs me up on this.

[A]s Pang notes, modern science has now validated what the ancients knew: Work “provided the means to live,” while rest “gave meaning to life.” Thousands of years later, we have the science to prove it. “In the last couple decades,” he writes, “discoveries in sleep research, psychology, neuroscience, organizational behavior, sports medicine, sociology and other fields have given us a wealth of insight into the unsung but critical role that rest plays in strengthening the brain, enhancing learning, enabling inspiration, and making innovation sustainable.” (link).

And so do you.  We're not likely to get them, though, in the Trump Era.  Get your lazy asses to work so you can make something of yourself.  Pull yourself up by your jockstraps and g-strings and get going.  By God.

But we are a tired nation, too tired to resist.  Give me the opium of the masses (or just opium).  I just want to rest.
Posted by cafe selavy at 9:13 AM