And Just a Little More 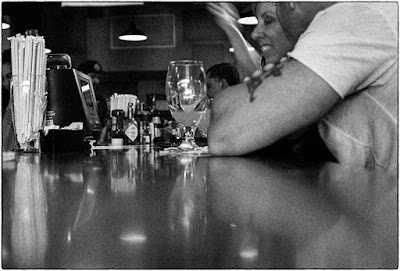 I think I've given up on the idea of buying a digital Leica camera.  They are just too expensive.  I'll keep shooting film for awhile.  I mixed up developer and fixer this weekend, so I'm ready to process my stuff at home.  I have both a Canon 5D and a Nikon D 700 DSLR.  These are really great digital cameras if I want to shoot that way.

The thing is, well, I just read this:

About the Leica M:

I have spent many afternoons staring at the thing over a cup of coffee and wondering why I care so much about it. As strange as this may sound, the reason is not entirely obvious. Yes, it is a “nice” camera, beautifully designed and a pleasure to operate… but that isn’t enough. It’s a camera after all, not a designer accessory (at least it used to be). The images it has produced for me are excellent, but if it were really about image quality and sharpness we would not being using 35mm film in the first place. There’s something else going on with this camera. I think the things people say about it are just excuses for fetishizing something when they can’t rationally explain why. People are complex creatures full of unknown depths, and the Leica speaks to those depths.

I thought about this carefully and I came to the conclusion that the magic of the thing is in the sheer impracticality of it. The Leica strikes me as a symbol of revolt against the boredom of everything ordinary and modern. It’s useful for works of art, but not much else. It exudes the kind of authenticity that we have been denied every day of our miserable lives. You don’t use this camera to please a client or to make a deadline; you don’t use it to make money at all. When I pick up this camera I know I’m holding the perfect tool to do something deeply personal and creative, something that no one else can criticize. Hell, the idea of it seems almost subversive to me after all these years, and that is a very powerful feeling.

Leica signifies all these things to me, and probably to a lot of other people as well. It’s what the kids at the art college would call the Leica’s “discourse.” Some part of you senses this when you have one in your hands, even if you haven’t got the slightest idea what it is. It seems so serious, so pure. The thing’s got gravity; it’s literally heavy. The symbolism is clear.
(link)

I, too, have done as much. I look at my Leica M and fondle it. It is a sickness, of sorts, but I give in.

I shot with my Rollieflex this weekend. That is a fun camera, too. It is easy to carry and weighs about as much as a helium balloon. People look at it and think it's cool. I'm trying to make it my medium format street camera. The Hasselblad, I find, isn't as good for that. I like the Hassie, but I don't like carrying it around.

And so. . . I've decided to stick with what I've got. I'll spend my money on my mother's Christmas present instead. Last night I made her a birthday dinner. She will be 85 on Tuesday. She was talking about getting a new mattress for her bed. I told her I would get it for her. If you haven't bought one lately, you would be in for a surprise. They are as expensive as a good camera. But my mother doesn't want a good camera. She wants a good night's sleep. I will try to help her get that.

Oh, I almost forgot!  She wants some medical marijuana, too.  She read that it would help ease the pain in her back.  This shows just how much the world has changed.  Mom wants marijuana and my gay friends want to get married.  There is no weirdness in the modern world.

It is a dreary morning, too warm and wet.  I am surrounded by holiday cards that I began writing for my people at the factory but have not yet finished.  I am putting a two dollar scratch off ticket in every one.  I gave my mother ten last night.  She won two dollars.  I never play lotto, but I will have a few left over for myself.  I'm hoping to win enough to buy my mother's Christmas mattress.  And more.  Just a little more.  Enough for that camera I said I wouldn't buy.