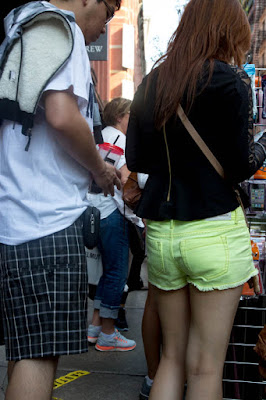 I haven't managed to go anywhere over my holiday vacation.  Each night we say, "maybe tomorrow. . . ," but the next morning we are lazy and do not have the energy to get on the road.  I don't think it will happen.  Rather, we play and we eat and we nap.  I am sitting at a table filled with holiday paraphernalia.  Not decorations, but booty (hence today's photograph).  There are cameras and zinc printers and paper and frames and little Tiffany blue bags and expensive eyeglasses.

And a portable record player.  It is what Ili wanted.  She is a millennial, you know, and they have become enamored with the analog world.  Or so I've read.  For those growing up digital, there is little fascination with what can be done in the virtual world.  But tangible things--now that's the shit.

So last night, Barbancourt Rhum drinks in hand, we put on the first record, an old Dave Brubeck album that begins with "Take Five."  I have hundreds of old albums that have not been played for years, so the scratchy sound of the opening was nostalgic as hell.  And there is another thing about listening to an album I had forgotten.  Sometimes, they sound like they are playing at different speeds.  Maybe that is the case with a cheap portable player.  But the sound of the non-digital music was a bit disconcerting at first.  It is like a replica of what I've been listening to these past years.

Another thing about albums, of course, is that you have to listen to all the tracks, even the ones you don't like.  You don't have to, but it is a pain in the ass to get up and skip tracks.  Especially when you are drinking rum.

When the album finished, Ili pulled out an old Jimmy Buffet album.  I started telling stories about old Key West.  Then it struck me how old the music was.  I came to myself and realized I needed to stop it.  Waxing on about past glories is good for about five minutes top.  After that, you are just another old, boring geezer.

And so I turned my attention to the pile of cocaine sitting next to the record player.

Just kidding.  I don't even like cocaine.  But the old music reminded me of those days when it was a mandatory party favor.

I've never been much for drugs.  I have preferred being ruined by liquor and love.

We could head south today.  It is on the table like the Christmas booty, but somehow I have a feeling we will stay in town.  There is nothing compelling us to go.  We have a Vespa and have been having much fun.  And there is still the gardening to be done.

I like the New Analog Age.  I like the look and three dimensionality of things.  I especially like that place where digital and analog meet.  Like the record player.  It has a bluetooth button that lets you connect to devices so that when you get sick of turning over records, you can connect to your phone.  Or you can print those digital images from your phone with the Polaroid Zink printer.  Like, dude, its magic.

I spent the day shooting with my old Leica CL fully manual film camera.  It is a thrilling pain in the ass that makes me appreciate the digital cameras more. . . but less.  Whatever.  I have a foot in both worlds.  Take that one as you will.

It is not going to be as warm as it has been today.  Temperatures will finally fall out of the eighties.  The streets are still full of people on holiday.  I need to take a chance with cameras.  No matter where I go. . . or don't.
Posted by cafe selavy at 8:04 AM