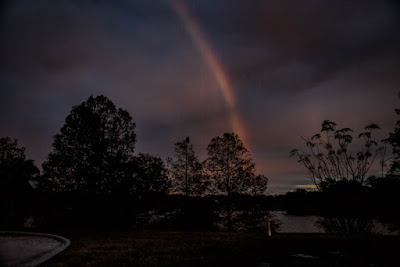 It is. . . over.  I am a bloated hog.  I've eaten and drunk and altered myself mercilessly.  I woke in bed and thought, "I will live on coffee and cigarettes.  I will exercise hours a day.  There will be no food, no liquor.  I am done."

I have folds of fat that I don't recognize.

We were to leave for undetermined beaches in the far south today, but I realize this is not practical.  The house looks like hillbillies had a meth party in it.  There are bits of food on the table runner that do not look familiar.  I think somebody must have fried parmesan cheese and catsup in the kitchen.  And why is an unwrapped stick of butter sitting on the kitchen counter?  I'm not sure who did what to whom.

I will say, though, that we did it all.  We missed nothing.  I've overindulged in everything.  I've spent enough money on presents to get someone through a year of college.

When my mother left late yesterday afternoon, I knew I was too dissolute to walk very far.  I just wanted to get on the Vespa and feel the wind on my face.  I grabbed my Leica and Ili climbed on behind me.  I never drive the scooter fast, but we goosed it a little feeling the need for. . . for. . . what?  Escape, I think.  We were just running away.

On Christmas afternoon, the stores are closed, the streets are bare.  We drove on four lane roads we usually avoid.  There was nobody on them.

We went to the city.  The city was beat.  At the park, hundreds of the homeless had gathered. Somebody must have been giving out Molly and Crank.  People were lying where they had fallen, in heaps and lumps on sidewalks and in the grass.  It was like a zombie invasion.  They lined the streets for miles.

We zoomed through the city and came out the other side, away from the gentrification, into the hood. There were plenty of people out.  Fellows on bicycles were screaming and waving to us.  There were nothing but guys.  We must have looked like bait.  I took a turn and another and we were passing the same fellows again.

"This probably isn't good," I said.

"Yea.  They probably just want to ride the scooter."

We crossed back over into town, then down a neighborhood street.  We came upon a girl walking her cat.

"I'm going to take her picture."

It was a new cat, she said.  She wasn't allowed to let it be outside in the place she lived, so she brought it out to walk it.  I thought that kind of negated the whole idea of not having an outdoor cat, but I didn't say anything.  We chatted for a bit as she tried to get her cat back on the right side of the fence. 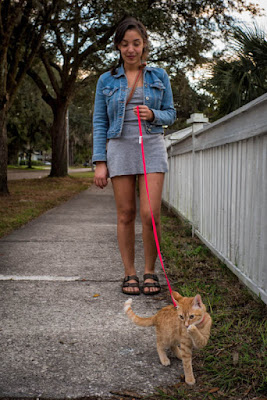 Then we were away.

It was getting dark and I had on my sunglasses, so we headed back to our part of town.  As we passed a lake, we both shouted out in unison.

It was the most complete, fullest rainbow I have ever seen.  You could see where both ends touched the ground, where there were pots of gold.  I wanted to get a picture of the entire thing, but I couldn't.  I could only photograph it in parts.

"What a piece of luck," said Ili.  "You know we are the only ones out.  It is our Christmas rainbow."

O.K.  She didn't say that, but she said something like that.  We both did.

And so, one last time, we drove down the Boulevard to see the lights of Christmas before returning home.