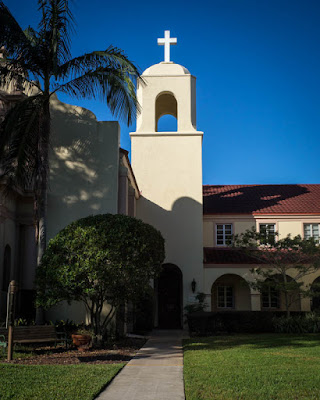 Here is the comment from one of the friends of the blog about this photograph:

"Very Hitchcock-esque. It is a disturbing image, for reasons that are difficult to express."

I was just thinking that I might need a hospital and a priest after this holiday season when I came across this little scene.  Lucky I had my new Leica.

It's a White People thing (link).

I've had to ask who George Michael was.  Really?  This made front page news?  My planet has blown up.  I can never go home.

And so, Stranger in a Strange Land, I ride my Vespa in hopes of learning about this new culture.

Yesterday, we cleaned the house and took down all the Christmas paraphernalia and put it away.  We talked of our plans to get skinny and rope-like and later said we weren't ready yet and drank bottles of wine while watching "The Crown" on Netflix.  We admitted that we may never leave the house other than to go to the grocery and liquor stores.

"Maybe we should do pushups between shows?"

One of the Christmas presents that Ili and I ended up getting one another is the Polaroid Zink printer. If you don't have one, get one.  My house is filled with little 2x3 pictures now.  They are perfect for making journals as the backs can be peeled to reveal a sticky back that can be attached to anything.  I'm going to start printing out pornographic pictures from the internet and sticking them inside the books of people I don't care for.  Or pictures of Hitler.  Think of the possibilities!

Today is a day of returning presents.  I got my mother something she saw on t.v. and wanted, but now that she has it she says it is too complicated.  I will return it to the store and get her the non-stick copper pan that is all the rage with people who watch commercial t.v.  But I am a little afraid to go to the mall now that the riots have begun.  I would hate to be beaten senseless by a gang of fifteen year olds.  But that is the way this strange new planet works now.  These are dark times.  I think it is probably beyond repair.
Posted by cafe selavy at 7:53 AM