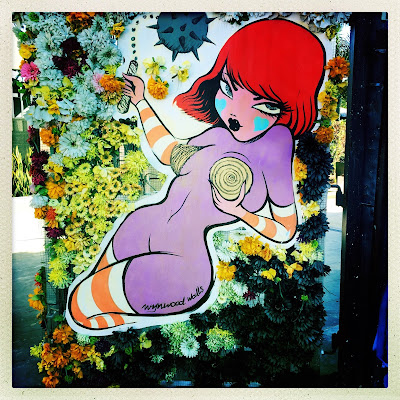 Our first Uber ride was to South Beach.  There were a bunch of fuck ups.  We waited in the street for Uber drivers not to find us.  Finally, on the fourth attempt, an Uber driver came.  His name was William and he said he was eighty years old.

"You don't mind my New York music, do you?" he asked.  It was old New York--Sinatra, Martin, and the rest of the Rat Pack.

"No, that's the sort of thing we listen to."

"Have you seen the Venetian Causeway?" he asked.  "Let me take you that way.  It is beautiful."

It didn't matter to us, really, as the Uber ride costs the same no matter what.

"It's a bunch of islands connected by bridges.  Lots of beautiful homes.  You'll see.  Where are you from?"

He drove Uber, he said, on a bet with his grandson.

"He's in college and is writing a paper about his grandfather driving Uber.  I'm supposed to keep a journal.  I like driving Uber.  They were the only ones who would give me a job.  Everything I applied for online asked, 'Did you graduate high school before or after 1985?'  I didn't hear back from anyone until Uber.  They didn't care.  Its a nice job.  It keeps me in the mix, so to speak.  You wouldn't believe the people I meet."

He had lived in Miami for twenty years.  Before that, he lived in New York.

"Yea, I guess."  He laughed.  "I lived there for about twenty years.  I had my own advertising firm."

"Does everyone ask you if you watched 'Mad Men'?"

He sounded like Larry David.  "Yes. . . EVERYONE.  That was me.  That is what I did.  They exaggerated, you know.  All that drinking.  They show them coming to work at ten and having a drink.  Nobody did that.  We never drank before lunch.  Everybody smoked, of course, all the time.  it was chic.  I had one of those little cigarette holders on my desk that you opened and all the cigarettes popped up.  Silly.  My wife gave me an expensive lighter for my desk, you know."

As we crossed the causeway, he pointed out houses and views.

"This is an interesting job.  I never have any trouble except for people throwing up in the car.  But otherwise people are nice.  You wouldn't believe the girls I pick up at night.  Hookers in little dresses that don't cover anything.  The other day, I got a call to pick a fellow up on one of the bridges.  I pull up and he is in a wet suit.  He had a big bag. . . what was in it?  'You don't want to know,' the fellow said, but I'd sure like to know what was in there.  I worked all night New Year's Eve.  I never have slept much, four hours a night, maybe five.  I didn't get home until five o'clock in the morning.  The bars are open here all night, you know.  New Year's Eve, I made a lot of money.  Yea, I like driving.  It keeps me in the mix."

We sat back and listened to Sinatra and Martin kibitz about drinking.  William was something.  We liked Miami right off.
Posted by cafe selavy at 8:16 AM