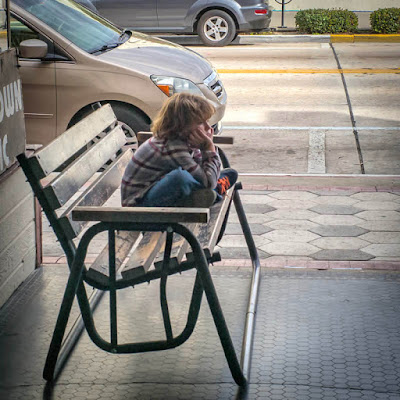 I should have crouched down in front of him and shot him face-to-face.  He looked perfectly glum and dispirited.  His mother was sitting in a chair opposite him, though, and the moment didn't look to be disrupted.  It was a terribly tough call, but sometimes you have to let the moment be.  Too bad.

Last night, Ili and I made the worst dinner in the world.  We didn't want to leave the house to go to the grocery store, so we used what was at hand.  Sometimes being lazy has its own rewards.  Ours was a bad meal.  But we had wine and cheese and olives and crackers, so the pre-meal made the bad meal more tolerable.  We've made pho six out of the last eight nights, chicken, beef, shrimp, pork, all wonderful.  We are one bowl diners now.  If it can't be eaten out of one bowl, forget about it.  We bought our big bowls at the Oriental grocery store, then went to Williams and Sonoma and bought even nicer ones--for the same price!  Who would have thought.  We also got those Asian spoons that are great for pho.  Does "pho" just mean "soup"?  It must.  If it does, I'm going to quit calling it pho.

We turned on "The Young Pope."  We are on the third episode.  Who is this made for?  It is the oddest show on American T. V.  Made by an Italian writer/director about the Catholic Church in a Fellini  style, it is quirky to say the least.  But I am growing an attachment and a curiosity about where it is going, so I will see it through.  I may actually become a fan, but for now, I am reserving judgement.

After t.v. and wine, it was bedtime--9:15 or so.  I am no night owl.  Never have been.  That surprised a woman to whom I told this on the way to the car after work yesterday.  She said she couldn't see me that way.

"Nope," I said, "this version runs on sunlight."

Even after nodding off on the couch, though, there is still the taking of essential supplements and the brushing of teeth and the washing of body parts, so Ili offered me some Moon Drops (link).

We should have drifted pleasantly off into la-la land, but while she was in the bathroom, I put on a song.  Oh that Van Morrison, so good so early so long ago.  We listened to two versions and stayed up for awhile.

It is good to be young.