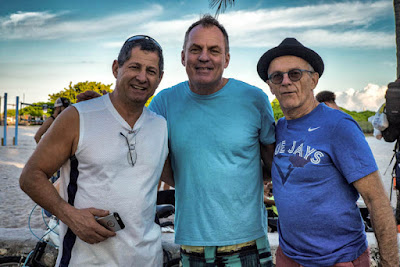 Nixon looks like a liberal now, right?  I mean, he started the EPA, activated price controls, ended the war in Vietnam, etc.

But remember, he knew how to deal with protestors, too.  After Kent State, we got disco.

I saw a picture of a protestor holding a sign that read, "We're All Muslim Now."  Or did it say "Moslem"?  I don't remember.  I am having trouble guessing what protestors want for sure.  I have a feeling that they are as dumb as Donald Trump about immigration.  But it is easier to protest than to run for president.

Remember what happened after the protests of the' 60s?  I know, it's difficult.  Drugs and alcohol, etc.  But what happened after was a tremendous swing to the political right.  It was John Connally (link), I think, who said, "America is going to swing so far to the right you will not recognize it any longer."  I put quotation marks, but I am sure that is not exactly what he said.  The point is, he was very corrupt and very correct.

When small town America sees Tranny Boy Scout Leaders in uniform, badges galore, marching for Islam. . . they turn ever further toward the Liar in Chief.

Things just aren't working out the way I would wish.

So I figure it is important to spend all my money.  I want a Leica Monochrom camera.  Why not?  And a Range Rover.  Hell yes.

The boys in the picture at the top of the post were trying to take a selfie on South Beach.  Isn't that the world today?  But I mean, really, three old white dudes?  As we walked by, they asked me if I would take a picture for them.  After I took a few with their iPhone, I said, "Wait a minute.  I want to take one with my camera, too."  The three of them were there on vacation from Toronto.  The guy on the right is an architect.  He had a very fine Fuji camera with him.  Enviable.  See?  That's what people do.  They spend their money on vacations and cameras.  We are told that experiences bring more happiness than things, but why are we limited?  They never say how much happiness both experiences and things will bring.  I'm betting it is exponentially better.  Why should we live like banned immigrants and choose between the two?  We're Americans, goddamnit.  It's time to act like it.

I'm beginning to understand the Life of Hunter S. Thompson better.  It is very difficult to look out upon the world without a twisted lens.
Posted by cafe selavy at 8:43 AM