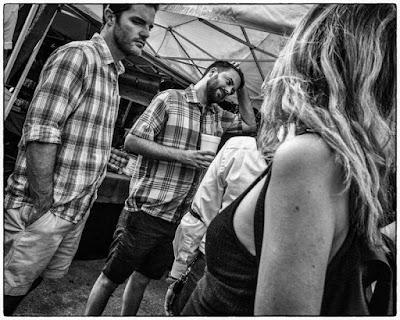 I have to learn to use the new versions of Lightroom and Photoshop.  They are different from the old versions in too many ways.  I tried to do some processing the other day, and I couldn't.  Some of the tool functions have changed or have been re-placed.  Many, many hours of re-learning.  The skin tones in this picture are too dark.  I know how to fix them now after a couple hours working yesterday.  I just haven't.  This is a black and white conversion from my new digital Leica camera shot with a wide angle lens at a fixed focal length and a small aperture.  I was experimenting.  There may be better cameras for this sort of thing.  Maybe.  I don't know yet.  I am not taking enough pictures.  But I've begun to carry that camera with me almost everywhere I go.  The only true thing I've learned is that the old saying, "The best camera is the one you have with you," is bullshit.  The best camera is exactly the one you don't have with you at the moment.  Buying cameras is a fool's game.  I have been convinced of that by the new iPhone commercial (link).  Cameras and photography have become romantic tropes.  They are for the foolish.

Speaking of tropes, I want to write a long and complex article on metaphorical language.  I won't, but I want to.  I love figurative language as much as anyone, but I realized from a bad conversation I had a few days ago that people no longer distinguish between the trope and reality.  For instance, I read in a book review yesterday a sentence that is clever but dangerous.  It read, in part, "[C]hild sacrifice takes many forms, and sometimes the act doesn’t require bloodshed but simply adults too wedded to their ideals."  I agree with the statement, in part, as it is quite imaginative, but to take it literally would be dangerous.  Too often, even with academic partners (or maybe especially with them), there is little discrimination.

I hear the phrase "false equivalency" used in arguments all the time since Trump began his presidential candidacy.  Indeed, Trump is the King of logical fallacies.  I would argue, though, that metaphors and similes are false equivalents.  To say, "Your hair is a golden field of wheat," or "Your eyes are stars that shine in the heavens," takes one perceptible similarity and says that the two things are equivalent.

I may be wrong.  I need to study this point more and may be premature in writing it here.  But I plan to do some research and deep thinking about this.  I will report back.

None of this is very interesting though.  I blame it on the weather.  The cold is everywhere as is the rain or snow.  Here in the sunny south this morning, it is near freezing.  I have been a slug and have ventured out little.  I don't even have alcohol to fuel my imagination.  Alcohol, I've decided, is the elixir of life and the merchant of death.  Going without is a poison one way or another.  It is much like being on a paleo diet.  Everyone knows the way to maintain a healthy weight.  You can eat all you want as long as you eat only meat, fruit, nuts, grains, legumes, and vegetables.  No refined wheat.  No refined sugar.  No alcohol.  There is no secret to that.  Mmmm.  It is so sensible that those who follow it are considered remarkable.  I guess it might be called the Puritan Diet.

I think I'll go now and fuel my imagination with some Puritan Art.  That is sure to be scintillating.
Posted by cafe selavy at 8:06 AM