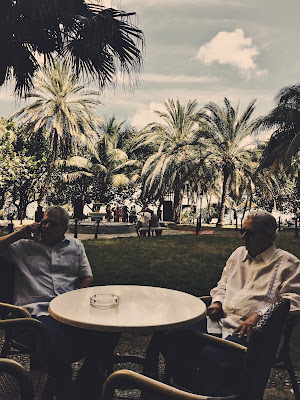 I have returned.  Now the dilemma.  How do you write about three nights in Havana?  Cuba.  It is not like stepping back in time so much as stepping out of time.  It is a beautiful post-apocalyptical country of great and terrible poverty.  I want to write it, but I don't know if I can do it justice.

But let me see.  Begin at the beginning, so to speak.  Ili and I had decided to take a trip a month, some short ones, some long, but to have a destination in mind always.  Cuba.  We had talked about it, then Ili spoke with an attorney who had just returned.  He said there was no trouble going or coming back.  You get your visa at the airport.  $50.00.

Ili began looking up places to stay, casa particulars.  She found many.  Many!  Apartments were even listed on AirBnB.  She would call me over and ask, "What do you think?"  There is no way to tell, of course, knowing so well how pictures and words can lie, so I would always say, "Sure."  But Ili is a researcher and dug deep.  If we wanted to wait, we could get one of the spectacular places that were booked up.  But I didn't want to wait.  There was no point in waiting, I said.  Havana gets hot.  Really hot.  I'd been there in 1999 at the wrong time.  If you wanted to see anything, you would have to go now.  We watched YouTube videos and looked through books and decided to believe the people who said it was best to stay away from Habana Viejo, the old city, as it was full of tourists.  The place to stay, we agreed, was Vedado, an upscale community.

One day, we inhaled a big breath and pressed a button.  We booked a flight.  We booked a room.  We would be leaving in less than a week.

We weren't frantic but busy.  Work consumed our daytime hours, and we were lazy at night.  There was little packing to do, a pair of pants, a pair of shorts, underwear, socks.  One camera and some sunglasses.  A notebook.  We could get that ready in no time.  Oh, we planned to re-learn some Spanish, do a little research on Havana.  But way leads to way. . . and none of that happened.

At the airport at dawn.  Sleepy.  We filled out our visas, got some breakfast, got on the plane.  And then, about half way there, Ili asked me a question I didn't know the answer to, and a cold chill pulled at my scrotum.  What the fuck?  I didn't know how to speak Spanish for shit, wasn't sure if we would really have a place to stay, wasn't even certain we could find it if we did!  I didn't know anything.  Why was I so, so stupid?

But that's the way it was.

Jose Marti International looked different this time.  Renovated.  It was barracks-like in the nineties.  Now it looked 1980's chic.  My nerves were clicking, but we found our bags, spoke to some people, got advice, and changed money.  There were no soldiers with rifles, no soldiers at all.  Havana, it seemed, had become tourist friendly.  We got a cab.  We gave him the address.  We left the airport behind.

Rene was a nice cabbie.  He was learning English and did pretty well.  We drove through the countryside for about half an hour, Ili in the front, me in the back shooting pictures through the window.  This looked just as it did when I was here before.  It could be the outskirts of any city in Latin America, the functionary half design of the buildings, the fading bright blues and pinks, the 1950's signage.  There were fewer propaganda signs than I remembered, none of the big billboards lampooning Uncle Sam in newspaper-style cartoons.

Rene wanted to know about Trump.  He liked Trump, he said.  He was a businessman.  This would be a common theme we heard in Cuba.  Business.  In a land with the tiny beginnings of capitalism, everyone seemed to want to be in business.

"Trump is regrettably crazy," I said, feeling contrition about the statement right away.  I didn't want to talk about politics here or anywhere.

I'd not been thinking about Ili, a stranger in a strange land.  She was looking out the window silently at the old Soviet Ladas and the 1950's American coupes and two-toned sedans in those old, garish colors.

"What do you think?"

We were getting close to our apartment, and Rene slowed down, craning his neck to see the addresses.  He turned next to the new American Embassy, drove slowly.  We found our apartment just a block away, a tall, ramshackle place right off the Malecon with a view of the sea.  Rene helped us with our luggage to the second floor.  Ili knocked on the door and a sweaty man in a t-shirt and shorts answered.  We were here.  Rene kissed Ili and shook my hand.

"We leave Sunday morning.  Can you take us back?"

"Yes," he said and handed me his card.

"I will call you Saturday night," I said.