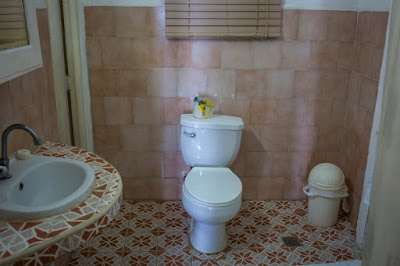 So. . . everything was in place.  We had made it through customs, had gotten a cab, and had secured our room.  We took a look around.  The apartment was huge and beautiful. . . sort of.  It was beauty in decline, so to speak, a once lovely place fallen into disrepair.  It was not an eyesore, exactly, but it gave merely a hint of its former glory.  It needed "fixing up" badly, but for $30.00 a night. . . it was something.  Fifteen foot ceilings, twelve foot windows that opened upon a balcony that looked dangerous, one foot deep and twenty feet long with a rusted and shaky guardrail that shouldn't be leaned upon.  We looked across the street through the Jose Marti Anti-Imperialist Platform to the Malecon and beyond to the sea.  The large living room had two wicker rocking chairs, a cabinet upon which sat an old t.v. with rabbit ears and a taped together controller, a dining table with two matching chairs and a sideboard and china cabinet with odd knick-knacks.  There was another large room that was bare but for a cabinet supporting a small microwave.  The bedroom was huge with a double bed and a daybed covered in old thin cotton sheets.  The kitchen was small, equipped with a gas stove, sink, refrigerator, and shelves holding the pots and pans and utensils for cooking and serving.  And, of course. . . the pink bathroom.

Within a few minutes, we were settled.  It was time for a walk, but first. . . well, it had been a long flight.  Ili went first.  And that's when we discovered that the toilet reservoir would not fill up again.

I showed her the empty reservoir.  She glanced at me quizzically.

I grabbed a large vase and began filling it with water, then emptying it into the tank.  Eight vases later, the reservoir was filled.  It took less than five minutes (the sink in the kitchen had a garden hose outlet for a faucet with a slow flow of water).  I took a pee and flushed.  No problem.

Five minutes later, we were ready to walk.

(Let me pause for an interlude here.  I have pictures of all of this, but I have not had time to process them yet, and I am not sure how interested you would be in them anyway, but Ili is leaving town for a few days and I will have nothing to do but work on them, so there will be many more henceforth.  O.K.  Back to the narrative). 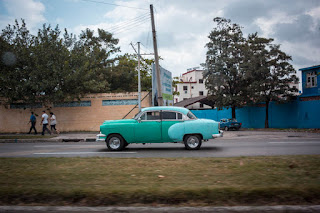 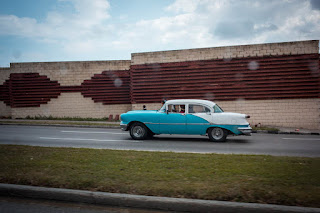 (from the window of the cab coming in from the airport)

We locked the doors and descended the stairs, looking down the hallway to the other apartments where people, not tourists, dwelled.  We waved and said, "Buenos dias," with big, American smiles.  We were friendly folks, we implied, just the kind you'd like to have for neighbors.

We were on the street.  To our left was the American Embassy.  In front of us was one of the strangest monuments I've seen (pictures to come).  We crossed the busy highway to the seawall quickly and began our stroll.  The Malecon was a grand sweep of a curving walkway.  Seven kilometers away, across the harbor from the ever-present El Morro Fort, was Habana Viejo.  It was early and we would walk.  It was a lovely walk with no possibility of getting lost.  I took out my camera.  It was time to begin 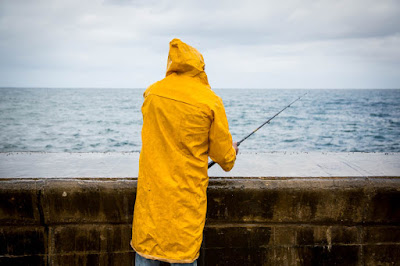 Still shy and a little unsure, I took pictures without making contact.  A fisherman in a yellow slicker from behind.  Old cars passing by.  I saw a man sitting on the Malecon wall.

"Con su permiso," I said, pointing to the camera.

"Si," he said nodding his head, but he wanted his picture taken with his friend or wife, I was not sure. They were beautiful with serious faces.  I took one, two. . . three, then came to them to show the  pictures on the little screen of my camera.  Excited and pleased, they asked if I could send the photos to them.  Ili handed them a notebook and a pen.

"Seguro," I said.  We shook hands and hugged.

"They were wonderful," Ili said.  "Make sure you send them the photos." 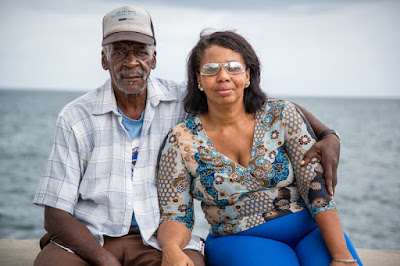 A fellow sitting on the wall called to me.  He made a clicking motion with his finger like he was using a camera.  He was asking me to take a photograph.  Sure I would.  I put the camera to my eye and snapped.  Right away, another fellow jumped into the frame.  They held up their thumbs (as too many people would I came to find).

"Where are you from," the first fellow asked in English.

"Bueno," he said.  Smiles all around.  Chit and chat, and then he told me of an art festival that was going on today.  Afro-Cuban art, he said.  He would take us.  So we followed him across the street and into the 'hood.  We had walked out of our neighborhood and into Havana Central, the working class neighborhood that was a bit more broken, a bit more beat.  We went down one street and then another, one fellow talking to me, one to Ili.  I could tell she was getting nervous, but I thought we were fine.  We cut through a restaurant and then a side street, and then we could no longer see the ocean or the Malecon.  I looked back at Ili from time to time, but mostly I was taking pictures.

I should have paid more attention to Ili, though, whose pace had perceptively slowed.
Posted by cafe selavy at 8:50 AM