A Night of Drinking and Planning 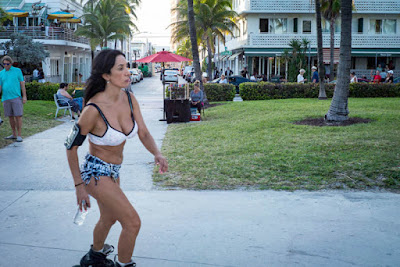 My meeting at the factory yesterday went long and wore me out.  I had nothing left when I got into my car for the drive home.  The sun was out and the light was beautiful.  I couldn't even think about going to the gym.  I needed to start the weekend, so I drove straight to the house where Ili had a glass of wine and a plate of cheese and crackers ready on the deck.  Soothing.  We drank and chatted and watched the neighbors walking their dogs go by.  Half a bottle in, it was time for the Vespa.

"Where do you want to go?  Hipster or Gastro?"

"I don't care.  Whatever you want.  There are advantages and disadvantages to both.  Each, I mean."

"Well, one has those great and powerful beers.  The other has a big window view from the bar."

"What are the disadvantages?"

She hit an app or something and a coin began to spin.  It came up tails.

"I always want the opposite of what the coin says."

"Then why did we flip?  Let's just go to the little hipster place."

"So you just want to be unhappy."

"No.  I want to go the the gastropub"

So we climbed onto the little Vespa and things were immediately better.  And when we got to the pub, we were fortunate that there were two seats at the end of the bar.

"I told you we would get seats."

When we sat down, the bartender said hello and slid us a golden drink in a coupe glass.

It was delicious and probably the only way to serve Old Grandad.  But it was strong and went right to my exhausted head.  We ordered two IPAs that came in 20 oz. glasses.  After not drinking much for awhile, they looked bottomless.

Ili, ever the social charmer, said to the bartender, "It looks like you've had more work done on your tattoo."  I looked.  I would never have noticed such a thing.  I sat back and relaxed as they talked tattoo talk.  I sipped the good beer and looked at the crowd.

"I just got you in under the happy hour prices," the bartender reported.  The Gold Rush and two giant beers cost us six bucks in a very expensive Gastropub.

"I told you we should come here," Ili said.

And then something good happened.  We planned our next vacation.  It is a surprise.  It will take some doing, but it has us excited and looking forward to something which is what I needed very much.  We must act today if it is to happen.  But this morning, Ili is insistent that we take care of the details.  And I'm sure we will.

After the pub, we came home and watched YouTube videos in preparation.  We sipped a little whiskey and ate some sushi, then mussels in a spicy lemon sauce with a good bread to soak it up.  And later. . . we woke up with dry mouths and headaches in need of big glasses of water.

We slept in, but the day is pretty and not to be missed.  There is much to do, and so. . . I will put on my little halter top and my rollerblades and hit the streets for some weekend fun.