Back to the Malecon 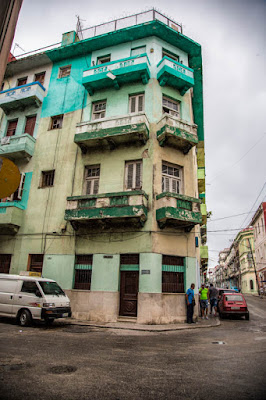 Our "guides" kept taking us further away from the Malecon and deeper into Havana Central.  I was pretty certain, almost certain, that there was nothing shady about any of this.  Most of Havana looks like downtown Detroit.  It is broken and ramshackle. . . just because it is.  People haven't the money or resources for upkeep.  But there are no drugs in Cuba.  I have been told that over and over.  And there is no crime.  Now that I've said that, of course, it sounds stupid like any absolute statement.  Of course there are drugs.  Of course there is crime.  But compared to the U.S., there are no drugs, no crime.  Ili, though, was entering alien territory and all of her senses were alive.  Me--I was mostly looking through the viewfinder.

Finally, though, we reached our destination, an old building with a kinda sorta cafe.  We were introduced to a fellow with a hipster hat and beard and led down a few steps to a little room filled with fantastical paintings in a primitive style, loud colors, outlined, unrealistic figures.  The fellow with the hipster hat turned to close the door.  And that's when I saw Ili's concern.

"Sorry guys, but we gotta go."

The Cubans weren't confused, really, but surprised.  The big guy with the hipster hat said in a condescending way, "There's nothing to worry about.  We're not going to rob you.  That doesn't happen in Cuba."

I didn't have time to say anything, though, as I kept up with Ili's back.

On the street, the guides wanted money.  It was a request, really, a plea.  But that is nothing new.  People don't engage tourists just to practice their English.  They are not looking for a good time.  They take you somewhere, show you something hoping you will buy some food from a friend, some art from a colleague.  Of course.

Ili hadn't.  I hadn't been thinking.  I was to blame.  I was only thinking about the pictures I would take, the stories I could gather.  Ili's experience was something else entirely.

There are photos of grumpy Ili back on the Malecon.  But the sea, the fresh air. . . we walked on toward our original destination.  We were headed to Havana Viejo. 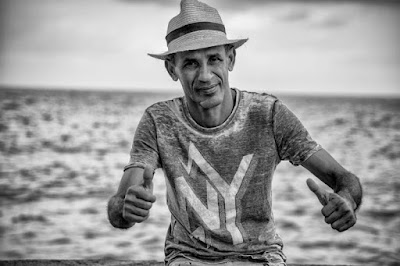 Along the way, from Malecon to Central.  I'm working on pictures, trying to find a processing style.  I haven't enough time.  It is slow. 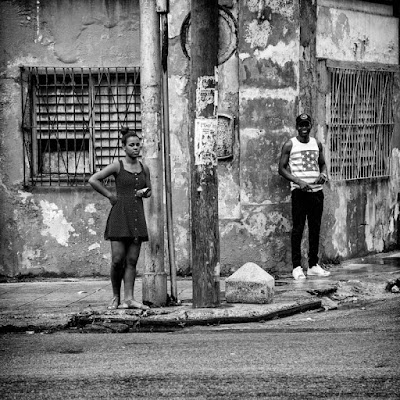