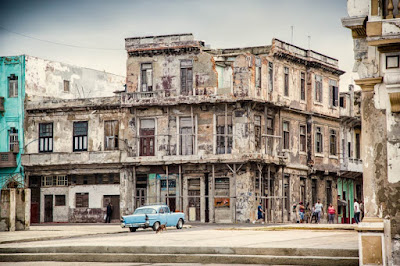 It was a long walk in air that had110% humidity.  I was sweating like a drunk, but that is just the way it would be in Cuba.  It was evident that tourism had not effected all of Havana yet.  The Malecon, maybe, where tourists would feel comfortable strolling, and of course, I had heard, the old part of town.  But in between, the magnificence of the city had crumbled.  Was it the result of the revolution, I wondered, or the result of the American embargo?  Whatever it was, there should be a lessoned learned.  We shouldn't do that again. 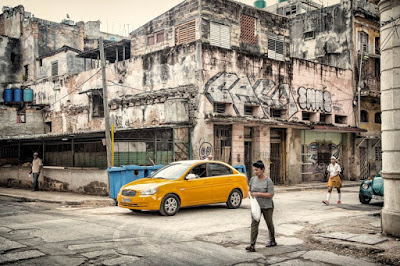 I had informed Ili that this would not be a vacation as most people think of it.  There was nothing to do but walk and look and talk, adventure and explore.  I was certain she understood what I meant.  But I knew, too, that soon, in the old part of town, we would be able to eat and drink. . . or at least drink.  You couldn't trust the water, but we would have to have faith in the ice.  I mean, you can't not drink cold drinks, right?  I didn't want to investigate too much.  Rather, we would just believe that ice was made from filtered water.  How else could they keep tourism alive?  But I knew in my heart of hearts that our bodies would be a little stressed.

We found the Floridita, the place where Hemingway is said to have invented the daiquiri, but it was packed.  We were hot and sweaty and had walked seven kilometers and wanted to sit, but in the bar, sitting was impossible.  Through an archway, though, was a formal dining room that was near to empty.  We stepped up the two steps that led to it and peered in.  A waiter came forward.

He waived us to a table where we quickly ordered two of the "famous" drinks.  We looked at the menu, which was heavily Hemingway themed, and decided to split Hemingway's "favorite," lobster, shrimp, and fish.

A band began to play.

At another table sat a gringo with his Latin partner--girlfriend, wife--I don't know.  But when she heard the music, she got up and began to dance.  It was a dance, but it was an exposition, too, for as she moved her shoulders, hips, and knees, she would point and explain something to him.  He endured it all with an old gringo grin as she turned her back to him and faced the band through the archway, losing herself in the Cuban rhythms.  It was not a dance that gringos dance, but at another table two young girls got up and began dancing, too, one blanco, one negro.

Ili was smiling when the second round of drinks appeared.  Everyone was drinking them.  They must be o.k., I thought, always the paranoid.

The food arrived.  The meal was a prediction, really, of all the meals in Havana.  Even at the best of places, the cuisine would be iffy.  My friends at home would ask about the food, imagining the Cuban food they had eaten in Miami, perhaps on Calle Ocho.  This food was nothing like that.  We were at the Floridita eating upper class sustenance, not haute cuisine.

"How are you feeling?" 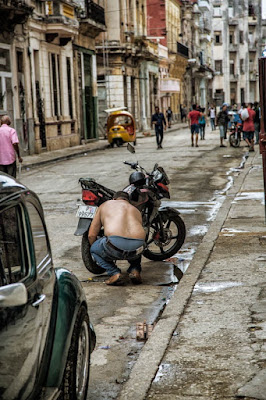