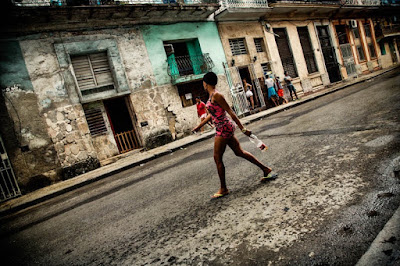 We walked around Habana Viejo, or what we thought was that, for the rest of the afternoon.  We wandered here and we wandered there, and then, tired from a four a.m. waking and a the uncertainty of travel to another country, we decided to take a cab back to the apartment.  Not a cab, really, but a motor scooter with a backseat and a canopy.  It was a lovely way to travel along the Malecon.

Back at the apartment, we bought some cans of Coke from the little cafeteria/shop on the first floor, then upstairs we poured some of the Havana Club rum we had bought at a rum/cigar shop next to the Floridita that was built for tourists.  Rum and Coca Cola--the Mexican kind with real cane sugar rather than corn syrup.  Sometimes, there are good things in life.

We sat before the big window in the wicker rockers looking out over the Malecon and had another.  The sun was setting and the world was turning gold.  It was time for showers.

"Is there hot water?"

When she was done, I jumped in.  I expected a shock of cold, but Ili was right.  The water fell out of the shower head in a tepid drizzle.  It was do-able.  The bathroom was large and the towels were big and thick, and then we were clean, then dry, then dressed in fresh clothes.  And that changes everything.

"Are you ready to get some dinner?"

We wandered through the neighborhood streets in the direction of the Hotel Nacional.  There were stores and cafes and restaurants along the way, a more "prosperous" and "charming" part of the city, low key and residential, and it came as a shock that there was so much discrepancy in a socialist system. . . but not really.  I mean, you know it intellectually, but to walk through it, to smell it and to see it, that is another thing.

Then we rounded a corner. . . and there it was.  I'd read that it was like the Breakers in Palm Beach, and it wasn't far off.  Outside lining the street was a fleet of taxi cabs.  Hotel security stood at the entrance to the long driveway up to the hotel where buses dropped off tourists from other parts of town, I guessed.  This wasn't like the rest of Cuba.  This was something else. 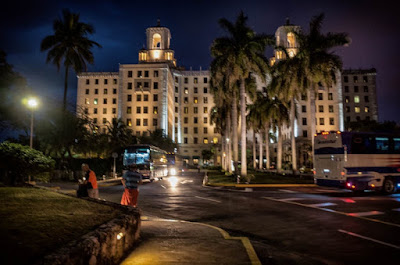 A doorman let us into the grand lobby where large groups of people mingled about.  We passed through to the huge veranda and then beyond toward a giant patio and bar.  International money.  We wandered about for half an hour or so looking into the grand ballrooms and restaurants, gazing into the gift shops that lined the lower floor.

We decided to walk back to a small restaurant we had seen on the way from the apartment, the California Cafe.  It was a small, outdoor place, and when we got there, all the tables were taken, so we sat at a high counter overlooking the street.  The waiter, a tall, handsome fellow, came with the menus and started to chat.  He brought our drinks and took our orders.  And then we heard the story of Yassa the waiter. 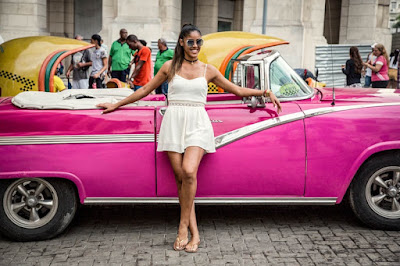