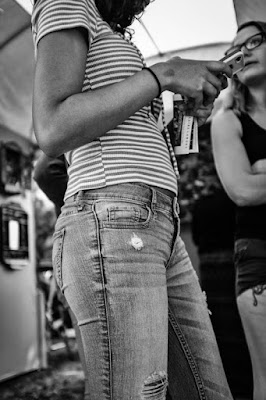 I found the beauty of the Fuji X100F yesterday.  It is small and weighs nothing.  It is easy to carry in your hand without a strap.  It focuses quickly and makes no shutter noise when you shoot.  For walking around a street festival, it is perfect.

That is what I did yesterday.  After work.  I left a bit earlier in the afternoon than I should have, but the day was as gorgeous as days get, the temperature in the low 70s, the sky perfectly clear and oh-so far away.  So I drove home, took off the factory clothes, put on my flip-flops, pulled out the scooter, and drove the half mile to the festival.  While cars couldn't get near, I parked within a hundred feet of the Boulevard.  I grabbed my camera and walked.

This first day of the festival, a Friday, the crowd was perfect, about a third of what would be there on Saturday.  I was able to walk through easily and see the "art" before it became impossible.  I didn't expect much, so I was really very surprised at the amount of things that caught my eye.  There were good paintings and some nice mixed media. . . and even a few photographs I liked.  Most of it was kitschy, but there wasn't nearly as much jewelry, bad pottery, photos of Cancun, or painted Adirondack chairs as in the past.  As I got closer to the stage at the far end of the park, I began to make out the music.  Three high school girls were singing like pros to some prerecorded music.  I wasn't sure what was going on, really.  Was it karaoke?  Closer, I saw that they were dressed in everyday clothes, poor girls wearing what they were able to pull from their closets to make outfits--tight jeans, blousy tops--and it made me think of myself performing with bands at local events when I was their age.  They were really pretty good, and I didn't mind getting a kick out of them at all.  I didn't know the music, but I was sure it was popular hit parade stuff.  I was all good will and happiness, however, and I couldn't have wished them any more luck.  They made me feel good.  I was happy.

After making my way around the booths, I wanted simply to walk the street and take in the crowd.  The afternoon light was falling dramatically now making brilliant shadows and pools of light.  I shot photographs without putting the camera to my eye, pointing in the direction of the things that caught my interest having practiced this enough to know what was falling on the sensor.  I thought of approaching people and looking through the viewfinder, but it was daunting as I kept running into people that I sort of knew or who knew me, some of them saying hello without my ever coming to any idea of who they might be, me smiling like a college president, carrying on conversations with small talk and questions for thirty seconds or so before shaking hands or waving as I made an exit.  I have lived here for too many years and have been far too visible to take pictures in my own hometown.  I began to feel guilty just holding the camera.

After a couple hours as things began to wind down, I decided it was time to head to the grocery store and home to the couch where I could eat a simple meal and watch some of the very disappointing NCAA March Madness.  But I was tired and had used up as much energy as I had here at the end of the week, and I needed some respite from the world.

This morning, looking through the pictures that I took yesterday, I marveled at the little X100F.  It is a wonder.  I set the menu so that it makes a RAW file and a B&W JPEG file.  It does a great job with B&W.  As I looked through the pictures, it was clear which images worked in color and which did not.  It is a luxury to see them side by side before I make any decisions about processing.  I didn't think I liked this camera, but I know its function now.  It is a wonderful and beautiful little tool.

And that is what I will aspire to be-a wonderful and beautiful little tool.  Or did I mean "fool."  I think immediately of Daisy in "The Great Gatsby," and her hope for her daughter.  I understand that wish now better than I did when I first read the novel.  Maybe, in these terrible times, there is nothing better to be.
Posted by cafe selavy at 9:00 AM