Even the Perfect Will Not Last 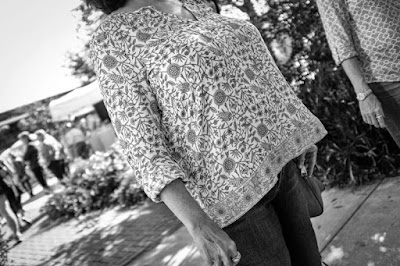 A perfect day of sunshine and moderate temperatures, and a night of '30s guitar music with drinks under the glittering stars.

In between, I shot a lot of pictures with my Fuji X100F. . . with the settings all fucked up.

I've found some of the camera's design flaws.  Since I have been shooting without raising the camera to my eye, I was not able to see that the settings had changed.  As I walked around, my fingers bumped several of the many dials on the camera.  I had bumped one that switched the camera from auto to manual focus, so most of the hundreds of pictures are clear only in the distance.  It was interesting in a few pictures, but most were just unfocussed.  I accidentally set it to take video, rather than stills, so I have about twenty two second movies that are interesting. . . for about two seconds.  I found this out when one of the artists asked about my camera.  He has an earlier version and I was telling him he will definitely want to get this one.  He asked if he could see it and he put the camera to his eye to take a picture.

I didn't know how to get it out of video mode.  It took me about five idiotic minutes to get it back in the right mode.

When I got home and downloaded everything, I was deflated.

But that is that.  Lesson learned.

Ili and I walked about the streets, me showing her what I had seen the day before, me letting her lead me along while I snapped street pictures, then we sat for lunch at a street-side table and watched the crowd go by. 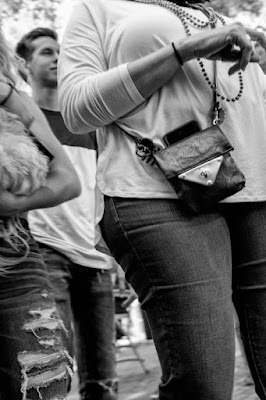 Vespa rides, marketing, NCAA games, and a nap on the couch until sunset.  Life is alright sometimes.

Then showers and clothing and a nighttime scooter ride to the party.  I had gotten there too late, it seems, for the chairs before the band were already taken (should I call them a band?).

A man came up and said, "They took your spot."

And it was true.  People remembered that I had been parked there for years and years.  I wanted to sit with Ili and wile away the night drinking wine and giggling, but now. . . well, people were handing the seats off to one another without a chance to move in.

Still, the night was a like a soft glove upon your cheek, though I was saddened that the crowd grew older every year.  I pointed out a woman who had long ago seen her best days.

"She used to be a ravishing beauty," I said.  "Everyone wanted her, and she was obliging.  One night, I was sitting with her in the most beautiful and interesting bar that has ever existed, and she leaned over to me and said, 'I'm so bored.  I think I've fucked everyone in here.'"

"I've known people like that," Ili said.  "I'm not judgmental about it, and neither are you."

I hoped that to be a compliment and not a complaint.  But all around us, the once hip and powerful were waning, either retired or practically so, and truly, I felt like weeping.  I looked at the young couple who were sitting in front of the band.  He was talking to the guitar player about the music--just as I had for all those years.  He was just as enthusiastic and knowledgeable about it as I.  I should have liked him, but rather I just wanted to bust him in the ear.  Not really, but rather.

I walked Ili around the beautiful grounds and through the house where everything was an art object, tables and ceramics and woven things and masks, not just the paintings on the walls.  All about the grounds were sculptures.  The host was an attorney and a bachelor who never married.  His home was set up for one.  It had always seemed an enviable life.

And then we were tired of it all, all the small talk and drinks, tired of standing around with the monied men and women, and so we drifted out to the Vespa and made our way home through the hauntingly lighted night.

This morning, it is still with me.  Nothing lasts forever, not even the most glorious things.  What sort of monstrous plan, what sort of terrifying spirit. . . ?

Ah, well.  The first high clouds roll and this morning light looks more tinny than it has for many, many months.  We may go buy some pictures today. . . maybe.  And tonight, there will be dinner with my mother.  And then. . . the factory.

But even that won't last.