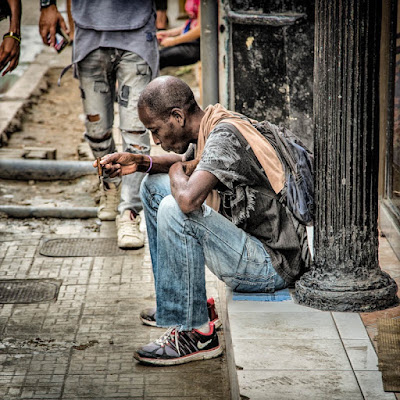 Day three in Cuba.  We were going to have breakfast at the Hotel Nacionale and soak up some of the vibe.  I mean, it is wealthy, but not American wealthy.  It is a sort of old movie hotel where international deals are made, both legal and not one would think.  Spanish is spoken.  The wealthy from every hispanic country--Venezuela, Columbia, Nicaragua--vacationed here.  So we sat under the giant portico and ordered mimosas and relaxed while the waiters and waitresses meandered among the tables without apparent purpose.  An order is easily forgotten as we found out often.  A server may disappear for what seems days at a time.  There is a different sense of organization, I guess, and priority.  We drank and smoked one of the little Cuban cheroots that I preferred, a Montecristo mini 10.  They are here and then they are gone.  Another round of drinks.

We wandered the grounds toward the ocean and down a little path that began to descend beneath the ground.  There was a sign.  This was a museum piece, of sorts.  We descended the path that was cut into the hillside until our heads were below ground level.  We came to a set of doors and walked in.  It was a bunker from the days of the Missile Crisis.  We ducked into a smaller chamber where a narrow windshield looked out over the sea.  Old military equipment was arranged as it must have been then.  As we stepped out, I saw what looked like a tour guide ushering some people in.  He looked at Ili and I with some consternation, and I saw him close the double doors behind him as Ili and I headed out of the room down a dim, narrow hallway.  We came to another room set deeper into the hillside with more military equipment.  It was interesting enough in its weirdness, especially set in the luxurious grounds of a resort hotel.  We ducked back out into the narrow passageway and continued away from the crowd.  We weren't sure where we were going, and Ili wanted to go back.

"I don't think we can.  I saw that fellow close the doors when we went down the hallway."

Ili had found in Cuba that her claustrophobia was more severe than she knew.  It looked as if panic might be setting in.  But we had come out into the sunlight in the narrow passageway, and ground level was only a foot or so above our heads.  I grabbed hold of the coquina walls and said, "We can just climb out here."

That was fine with Ili, and quick as lightning, she had climbed the walls and was out.  I followed her out, but I was about to find out how old I had gotten.  I put a hand on each wall and hoisted myself up with one foot, but when I tried to reach the foothold with my other one. . . I couldn't get it up.  My back, my hip, my knee, my belly--they all conspired against me.  So there I was, stuck and grunting, my arms beginning to imitate a sewing machine.

"Do you need help?" asked a concerned Ili.

I was concerned, too.  How old did I look there, trembling, grunting, on the verge of farting, probably.  Jesus Christ, I had climbed some of the classic rock faces in the world, and here I was, stuck in a trench, my back beginning to seize.

Just then, the little fellow I took to be the tour guide came running down the path.

His presence, I assume, gave me a shot of adrenaline and somehow I topped out of the trench on the wrong side.

"Peligro!"  That's what the many signs said, and I was truly worried.  Was this part of the property booby trapped?  I was paralyzed thinking we might step on a land mine and be blown to pieces.

"Why are there all this red danger signs?" I asked Ili.

"Because of the cliff.  You're standing next to the cliff."  She looked worried.

"Oh," I said, and hopped over to her side relieved that I would not be blown to smithereens.

As we walked across the grass back to the hotel, Ili regained her humor.  She looked at me, amused.

"My back is starting to tighten up, but I'm fine."

But that realization had only come to me, not to Ili.

I realized she'd known it all along.
Posted by cafe selavy at 8:19 AM