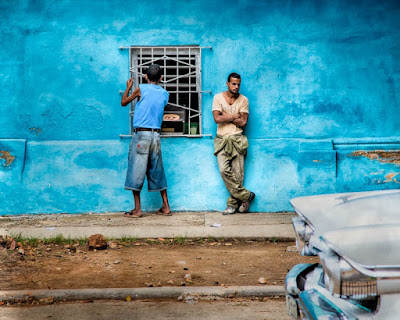 Since coming back from Cuba--and it has been awhile now--I have been sleeping an inordinate number of hours each night.  I have not been rising until long after dawn, even on days when I am to be at the factory.  Ili, too.  And I wonder what is causing this?  Could it be Cuba, or is it the Trump presidency?

Let me tell you about Old Havana.  It must have been one of the most beautiful cities of its time.  The detail and craftsmanship that went into planning and constructing the buildings is a marvel, and they are still beautiful even as they crumble.  Wherever they are restoring the buildings now, however, they are plain, all the beautiful luxuries reduced.  They look. . . American.  There are modern touches, you know, that are interesting in their own way--an archway here, a veranda there--but scrolls and porticos and balconies are reduced to flat planes.  New buildings are now being constructed now, ones that look like the glass banks you see in any modern city.  They are shiny reminders of what you have missed.  You realize as you walk through the narrow streets and the open plazas that there will never be another Havana.  It is a disappearing ghost, a crumbling, rotting memory.

In old Havana, the cruise ship deposit their bounty.  The Europeans, the Canadians, and a few U.S.  When you meet Cubans, they ask you where you are from, for the blancos look much alike.  When you say, "U.S.A." their eyes pop.  It is still a new thing, I guess, though I wouldn't have guessed, and they tell you how much they like the U.S.A.  They have relatives there, they say.  They want to go there, live there.  They don't like the Europeans much, they say, and they like Americans more than Canadians, which is a big surprise.  They say the Europeans are arrogant and dismissive.  That is what Yasso told us, too.  He did not like the Italians, he said, but I began to realize that much of his attitude has to do with the American custom of tipping.  We are used to this, the old 20%, and that, I thought, must surely be the difference.  That and the fact that they haven't seen as many Americans.  Familiarity, etc.

Ili and I wandered the streets, picking out restaurants that looked good.  There were no shops, or hardly any.  There were a few on the side streets that sold woven hats and bags and an occasional women's shop that sold rustic tops.  And there was street art for sale here and there. 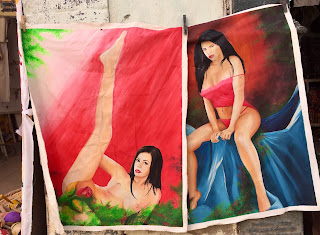 I should have bought one of these paintings.  I didn't even ask the price.  Cheap enough, I would guess.  But I bought nothing even as Ili bought presents to bring home.  She bought rum and cigars and straw bags for she is much more thoughtful than I.

We came upon the Ambos Mundos, the hotel where Hemingway stayed when he lived in Key West, and we went to the rooftop bar.  This is where the tourists were, of course, but we were tired and wanted a drink.  We could have been anywhere.

"This reminds me of that rooftop bar I told you about in Charleston," Ili said.  We had our mojitos and gazed at the crowd, glad to be off our feet in the shade for a minute, but that was all.  One drink and then. . . .

We took the stairs to the ground floor rather than stand in line to cram into the open cage elevator with the other tourists.  I wanted to see into one of the rooms, for the building and the open garden spaces on each floor were lovely.  And we got our chance.  They had turned Hemingway's room into a tourist attraction and we were tourists, so we paid the few dollars and took the tour, if you can call walking into a hotel room a "tour."  There was a bed and a desk and half shuttered windows that looked out over the streets.  It was clear why Hemingway had chosen this room here near the docks and why he wrote "To Have and To Have Not" in this part of town.

We decided to take a cab back to our apartment rather walk the seven kilometers and made our way to the Malecon where many taxis waited.  We were hungry and needed showers.  It would soon be dark.
Posted by cafe selavy at 9:29 AM