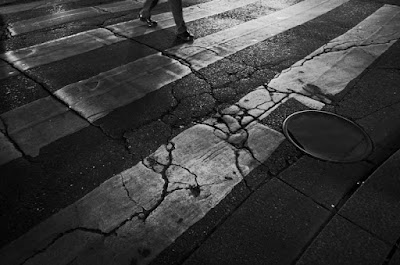 I went to the beautician yesterday.  She is getting ready for some sort of bikini/body building competition.  She's been doing this for the last few years.  While she was beautifying me, she kept looking over at her phone.  Her instagram was blowing up, she said.  She had posted a picture.  She showed it to me.  It was a sexy selfie in the mirror showing off her competition-ready body.  She gets her kicks from social media now.  Her life used to be different.  I know.  She has been doing my hair for over fifteen years.  She was young, a pretty, gypsy-looking Russian Jew.  She was more reserved then, but she got less shy.  She began running around and then she was talking about her life.  In some ways, it seemed enviable.  Then she met a guy, got married, and settled into that life--work, dinner, the couch and t.v.  She got pregnant and had a child, a boy.  Then the husband left her for a fat girl.  That is what she said.  Then things began to change.  She had her own beauty shop, but she sold it.  She started to dance--ballroom, flamenco.  That was her passion.  Her parents helped with the boy, of course, and she began working in another salon in which her parents were part owners.  She did hair only a few days a week, and she danced.  Her sister got her into body building and set her up in smaller competitions.  Her body which had become middle-aged with marriage and childbearing began to transform.  And so did her personality.  She was out again, going to clubs and events.  She began dating.  Every time I went to get my hair done, she had a new boyfriend.  They were always younger.  It got to be a schtick, it seemed to me.  But it was hard, too, because she had a son.  She could not stay out late for many reasons.  But she could stay up all night with social media and online chats.  This got to be a thing she could count on.  She would meet someone online, then in person, but they were always better online.  She had created an online persona and people were intrigued, and this began to sustain her.  Likes.  Online was clean and simple.  Life was messy.  Yesterday, she told me she got a roommate.  It is good, she says, to have someone in the house.  The roommate is also a Russian, a woman she has known for awhile, and she helps with expenses and helps look after her son.  And there is Instagram.

If I showed you a picture of her, you would understand.  She is pretty and exotic.

More and more, this is "the life."  People--flesh and blood and psych--are problematic.  And it is true.  I know that I am very monastic in my life, and I don't even do social media.  I don't do it for many, many good reasons.  It would not be good for me.  But for people who grew up with the Kardashians, et.al., they know how to play in that arena.  It is theirs.  They are the founders, by and large.  I wonder, though, what will happen when they hit an age when their selfies are no longer desired, when the "likes" quit rolling in.  Or will they be like a lot of people I don't understand, an age-dependent group who need one another to remember "when they were young" like that Margaritaville crowd who hold onto flowered shirts and ankle tattoos and mustaches and shorty boat shorts and boat shoes and hippie dresses that show too much when they dance with a drink in one hand and a cigarette in the other.  That is just the oldest generation-bound generation that I eschew, but it is certainly not the only one.  Social media is full of them.  At the factory, people pull up their Facebook and Instagram pages all the time to show the life they lead, their children and their good times.

You think I'm being judgmental for someone who writes a blog?  You're right.  I lost my way somewhere along the line.  I don't make the pictures I want to make any more and I don't tell the stories I want to write.  I am not living any better or worse than those social media mavens.  Maybe worse, I don't know.

Yesterday, the beautician chastised me for giving up making pictures and writing stories.  She said it made her very sad.  "What can you do?" I asked.  "I guess," she said, "if what you are getting in return is better than what you are giving up. . . ."

Who knows?  That is all life is, sometimes, a matter of what you will have to give up to get on with things.  I asked my ex-girlfriend whose son is almost grown if she would do that over again.  There was a long, long pause.  I don't think she would.  In the end, though, on the brink of the grave, I think, if we were truthful, we would all have to answer the same way.  There is no ideal life.

But at least there is social media.  It fills some holes, I guess.  Ask the President.
Posted by cafe selavy at 10:12 AM