Clarity and Concision. Repetition Is Required. 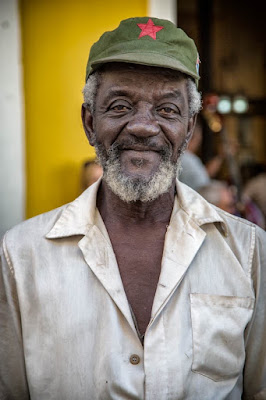 It is telling to me that Cubans love Americans.  This may be the only place in the world where they even like us.  We have been the great oppressor.  Castro railed against us endlessly.

Oh. . . they will come to dislike us, I'm sure, once they get to know us.  Right now, though, they love us for the money.  They yearn for our freedoms, too, but immediately money is the thing.

What is clear to me is that the effects of propaganda break down upon contact.  The lies of propaganda can't exist in the light of day.  Darkness is its friend.

The right loves propaganda.  The left loves myth.  Back in the day, we loved the myths about "The Little Red Book," Mao, and many other stupid things.  We loved the myth of Castro, the folk hero Castro who was a champion of the little people.  We didn't really question that there were no free elections.

And maybe we shouldn't have.  Look what we got in the last free election.  Those don't always work out so well, either.

I think this photograph would have worked better if I had shot it on black and white film.  I should have stepped in a bit closer, too.  Shot him from the tits up, Mark Tucker style.

All I've been able to think about lately are cameras, lenses, and photographs.  Everything I know about photography is beginning to coalesce.  I understand why I have so many cameras and what each lens it really for.  I know that if you set out with a clear goal, you can bring the right equipment and that you have to exclude everything else.  Knowing what you are going to do and why, clarity and concision.

Like most people, my life has been lived with not reckless but random abandon.  Oh. . . but the two things are not mutually exclusive, are they?  Reckless and random might be fruitfully conjoined in this discussion (if discussion it is at all).

Not always.  I knew exactly what I was doing in the studio projects.  That's why I love the pictures.  There was a definite plan and everything worked around that.

I don't necessarily have to have a studio to be thusly focussed, though.  I just need focus.

There is just one more factor needed in this equation.  Work.  Lots of it.  None of it is easy.  Repetition makes it more so, but much repetition is required.

Well, now. . . I've just given myself a good talking to.  No segue between the two parts here.  I've already titled this entry, but I could have called it "Propaganda and Myth," just as easily.  Or "Recklessly Random" which might have been a better explanation of the mess that was to come.
Posted by cafe selavy at 7:32 AM