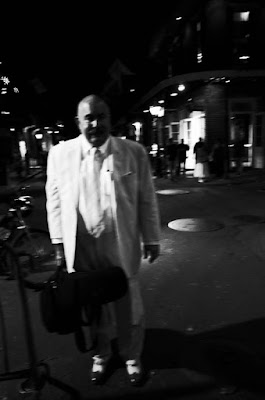 Last night was the full moon.  The Flower Moon, they call it.  Ili and I went to the lake to watch it.  Big and orange, it was.  But the night went swell and I slept normally.  Perhaps that is why it is called the Flower Moon.  Sweet and gentle.

Maybe I should have cropped this picture so that the man was better centered, but I like the random David Lynch quality that I imagine it to have.

I probably should have done the same with my life--centered it more.  Rather than living the dream, I read the wrong things.  I was sold a bag of shit.  I've been living someone else's nightmares and calling it literary.  C.C. says he is changing his mind about book burning.

My recommendation, kids, is to stick with the classical writers like Lee Iaccocca and Donald Trump.
Posted by cafe selavy at 9:47 AM