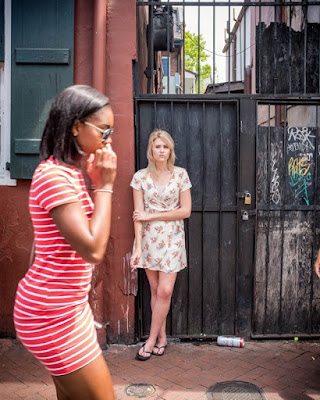 People won't take to the streets today.  College classes won't be disrupted.  People will take to Facebook to make comments or post videos from last night's CNN broadcasts.  They will tweet.  But there will be no armies of the night.

Even the young are old, tired, and useless.

Life goes on, though, even as it did in the Soviet Union and as it does under dictators all across the world.  You are either boss or little people.

We grew up believing one thing.  We are learning another.

Last night, all night, I had nightmares about alligators.  They were vivid.  I was not in them.  I just saw animals in water and alligators slowly approaching them, the little bite, the surprised look, the dragging under water.  Over and over again.  The last one I remember was a cougar entering the water, the alligator taking its time imperceptibly approaching.  Top predators.

I wonder what it means.

I woke at four and whispered something.  Ili responded.  Don't you sleep, I asked?  Maybe she worries about me all night long.  We cuddled.  And then I slept far too long.

In Cuba, people are very nice.  I think under dictators and severe oppression, people are sweeter.  Maybe Americans will become better people when their rights are compromised and many freedoms are gone.  Perhaps we have become arrogant with rights, pompous with freedoms.  When people talk about their rights, I often asked where these are granted and from whom.  Nature?  God?  The government?

Only criminals are truly free for they deny all authority.  Jean Genet probably said that.  Trump will prove him to be a genius.

Postmodernists must be gleeful.  We are living in post-historical times.  It is the triumph of theory.

I will go back and reread "The Outsider" by Colin Wilson.  It will be quick.  My copy is well outlined and annotated with marginalia.  One must become The Underground Man.

Now it is time to enter the very real world.
Posted by cafe selavy at 8:57 AM