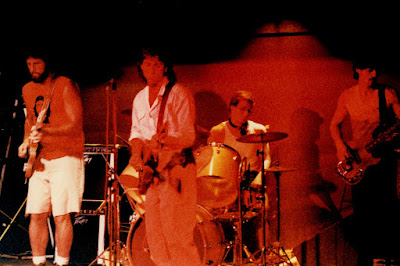 How is it you go to bed feeling so healthy and good and wake up feeling like you need a doctor?

I was in bands as a kid and again as "an adult."  The one here was quite "successful," though as a kid I played in a band on television which impressed the hell out of my parents.  Well, not really.  I mean they never acted like it much.  It was a quiet generation and there wasn't a whole lot of praising going on.  But the band above did O.K.  We regularly played in large clubs to crowds in the thousands.  We played music festivals, too, once to a crowd in excess of ten thousand.

Last night, the drummer sent me this picture.  Jesus Christ--we look like the Village People.

We were "anarchists."  We wrote a lot of the songs we played.  They were all socio-political.  My favorites, though, were the odd covers we did like "Secret Agent Man."  We sounded like a cross between The Animals and The Ramones.  I think.

The past is always coming back to haunt you, I guess.

It is Memorial Day which means I'll grill burgers and hot dogs for my mother and Ili.  That makes two family days in a row.  I made a fish stew for my mother last night.

And now I have to go.  Someone in the house is grumpy and wants to get our exercise thing out of the way, over and done.  I feel like shit and would rather not, but the world is coming to a rapid end and I want to look good when it does.