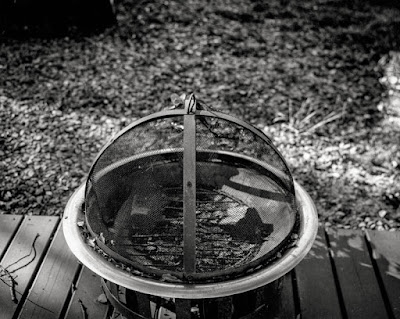 Film.  Frustrating.  Too many flaws, too much dust, too many scratches.  Tedium in post processing that I don't want to do.  Weird colors, too.

The long, beautiful weekend is over.  It is hotter than you can imagine here, and my air conditioning is not able to keep up, even with the thousands I just spent on having my attic insulated.  I feel as if my house is built over the fires of Hades.  I drive around the neighborhood and look at other old, wooden houses and at how much the sun beats down on their roofs and when and I ask myself, "How do they keep their houses cool?"

The answer comes to me eventually.

This is another year in which I will spend close to $20,000 on house repairs.  How many in a row?

We had the best Memorial Day picnic meal ever in the history of such things yesterday.  Stuff I don't eat.  It was decadent.  You won't think so, but these are taboo foods around here: hamburgers, hot dogs, potato salad, baked beans, roasted corn, watermelon, and homemade peach ice cream.  Plus drinks.

I've changed today's picture since I wrote this.  This is my Polaroid/4x5 conversion camera test.  It works, but the framing guides seem to be off the closer it gets to the subject.  Still, focus is perfect.  I'll take it to the shop to see if it can be adjusted.  It is easy.  It is fun.  I developed the film myself in a Kickstarter company 4x5 tank that is easy to use.

Here are two photos of the Vespa in the driveway, the first developed traditionally in D-76 and the second using the New55 R5 monobath.  I never have any luck with the monobath and am giving up on it.  You can probably see what looks like dust on the picture. It is reticulation, a breaking up of the film due to temperature.  At least that is what I think it is.  I don't know what that light spot is in the first.  I just know nothing like that ever happens with digital images. 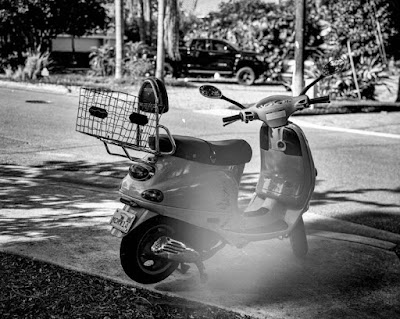 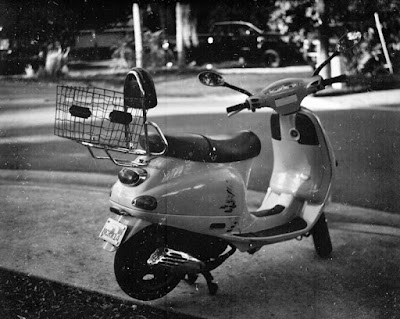 But as I say, the camera is a pip, and I am going to start making street portraits with it, I think.  I have some color 4x5 film that I will shoot but have to send off to a lab for development.  That will be expensive, but I want to see what they look like.  Will it be worth it?

If nothing else, I have shown you two things today: how dull and mundane my writing and photography has become.  I must remedy that somehow.  Oh. . . but there is nothing but trouble there.
Posted by cafe selavy at 7:07 AM