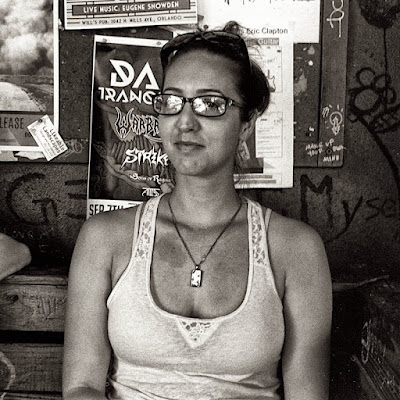 A woman nice enough to let me take a picture with my new camera.  I knew the fellow she was sitting with for a long time, though I haven't seen him but a couple times in ten years.

I thought to myself, "What the fuck has happened?"  I used to live in a world of phone booths, where you always brought your hand away from the receiver wondering what the fuck the sticky stuff was.  The buttons were always gummy if not stuck, and who knows what tubercular sicko had used the phone before you.  You passed cigarettes around the group and shared soda out of bottles.  Now I hear people say things like, "Maybe you ate too much gluten last night.  Did you eat a lot of gluten?  I know that happens to me."

"I know what you mean," I"ll say in response.  "Jesus Christ, I brushed up against some wheat at the store the other day and my whole leg broke out.  They had fucking peanuts sitting out on an open stand!  I thought I might call the proper authorities."

I don't want to be mean.  I know people DO have a lot of food allergies now as a result of something. I can't remember what right now.  I'm sure Monsanto had a lot to do with it.  But with so many environmental disasters now, I just know its true.  I'm not blaming the victims so much as commenting on the modern world.  I am often culpable of micro aggressions, though, and need to work on that.

What scares me most is that Steve Bannon is saying something similar to what I and my old version of a lefty crew have been saying for some time--Trump is president because of the identity politics crowd.  Strange bedfellows.

I should have started this post with a trigger warning.

But I have bigger issues on my mind.  There is an H.S. Thompson-style weirdness going on tonight in the home of the American Dream, Las Vegas.  It is all macro aggression and giant male horseshit.  I swore I would have nothing to do with it.  It is a capitalist's dream and a cultural nightmare.  Two shits, one a boxer and the other a fighter, will square off to the tune of about half a billion dollars take-home pay between them.  And as this runaway train approaches the crowded highway, I just can't seem to look away.  I don't want to watch the fight, but I don't think I can not watch it.  How can I possibly justify paying one hundred clams to watch this on t.v.?  Well. . . one way is to admit that I could not stand to watch this in a bar.  Somebody would bump me and I would have one of my now shrinking testosterone dumps, and then sometime later I would wake up and get off the floor.  So there's that.  Another factor is that it was only the outside fan motor on my air conditioning unit yesterday causing my distress and that it was replaced fairly easily.  Maybe it was a capacitor, but I don't know what that is and I am not really sure.

And of course there is this--I was raised to watch such things.  We all know McGregor is going to get the shit beaten out of him. . . but what if. . . ?  I don't know how not to watch this twisted travesty.  It will be late, I know, and I will be wishing I had gone to bed, I know, but how can I not watch?

I'll be asking myself that all day long as I try to decide.  Maybe I won't.  That would be the thing, really, just to be smart and go to bed.

We'll know soon enough.  If I do watch it, I won't even know who to cheer for.  I don't like either of them at all.  It must be weird for Mayweather to realize that McGregor can kick his ass any time he likes, but that he will just fuck McGregor up in a boxing ring.  There is no way Mayweather is going to fight him any other way.  And so, to see someone like McGregor get his ass kicked is like seeing Virginia Gallagher chase down the fastest boy in the sixth grade and kick the shit out of him.  We were all stunned but somehow secretly pleased.  This fight makes no sense at all, but nothing seems to anymore.

No, I've convinced myself that I will have to watch this spectacle.  I will get some gluten free pizza and gluten free beer and sit right down and have myself a ball.
Posted by cafe selavy at 9:24 AM