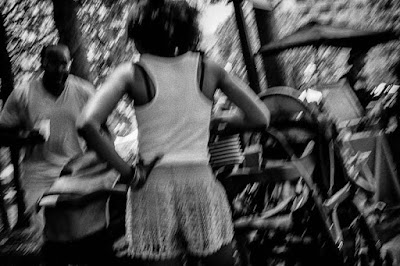 I agree with Woody Allen--it is hard to have fun when people are suffering.  The images from Houston are terrible.  I've been to Houston, and I never liked it.  But man. . . .  I lost many, many tens of thousands of dollars and was ruined financially by Hurricane Charlie, so much so that I have trauma every time the skies grow cloudy and the wind begins to blow.  I know what it is like to no little extent.  People whose houses have been flooded will not recover.  The insurance money will not cover their losses.  Mine didn't come close.  For some, their homes will be repaired.  It will take a year or more.  And when they move back in, they will always be sniffing--"Do you smell mildew?"  Worse than that, nobody will buy a flood home.  They will never be able to sell their houses.

The developers who build in flood plains and the politicians who o.k. that will never suffer a penalty. In my own home state, you can build on a water recharge area as long as you set aside some mitigated property somewhere else.  People buy those homes thinking that it is o.k. because there were studies done and the state said it was fine.  The rich get richer and the rest get rising waters.

Don't buy a home in a flood plain.

But I can truly say that I don't see anybody having much fun any more.  People are mean now.  Even the left (link), or what we take for "left" now.  Faces are dour.  Nothing is pretty.

That is a rhetorical question.

I've been shooting with film cameras.  The last two posts were shot with my Leica M7 and a 28mm lens I bought on eBay for a good price.  Film looks different from digital images for sure, but man, it is slow.  You can really pop out a lot of pictures with a digital camera.  It takes forever with film.  But people will let you take their photograph with a film camera much more readily.  Film cameras seem to make people happy.

Maybe that is what we need--more film cameras.  I would like to see people happy again.  I'm tired of the snotty intelligence we have created, intelligence that has been weaponized and used as an ideological battering ram rather than as a tool for understanding.

Whatever.  Tomorrow, perhaps, I'll tell you a story about the kimchi I bought yesterday.  But I must wait for the accompanying picture, and that won't be ready until tonight or tomorrow.  That's just the way it is with film.
Posted by cafe selavy at 9:09 AM