Not Even A Story 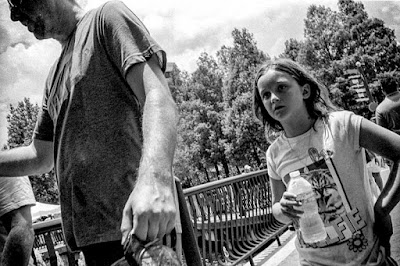 I've been a little sleepless which makes me sleepy, so I don't really understand it.  I wake up in the night and don't fall back to sleep.  I try not to stress about it for that only makes it worse.  But I think to myself, "Oh, I'll be tired tomorrow."  And sure enough. . . .

That's not much of a story, but I am not living the kind of life that generates stories.  I'm not even living the sort of life that let's me overhear stories.  It is not that my life is bad, it is simply story-less. The people I am around on a daily basis don't tell stories so much.  They say things like, "Last night, we drank some really good whiskey," or, "We went to Harvey's for dinner this weekend."  These are the verbal equivalents of Facebook postings.  We are not a story-ladened people anymore.

This is another Tri-X photo.  I know it is silly to use film and then scan it into the digital realm when I could just shoot with a digital camera, but the entire experience is different.  It is thrilling to find a good picture in a proof sheet.  It is also unusual.  I got back two rolls of film last night that didn't have anything I liked.  I'm throwing the negatives away.  I can't afford to store everything any longer.  Sometimes, by the time I get a roll of film to the developer's, I don't even know what is on it any longer.  I am hopeful.  And then. . . .

But when you find a good image, it is like finding a gem.  Maybe.  I've never found a gem.  Not a gem nor a truffle.  But you get my drift.

I'm going to keep shooting film for awhile, if for no other reason than I have a bunch of film cameras.

And that's not much of a story, either.
Posted by cafe selavy at 8:36 AM