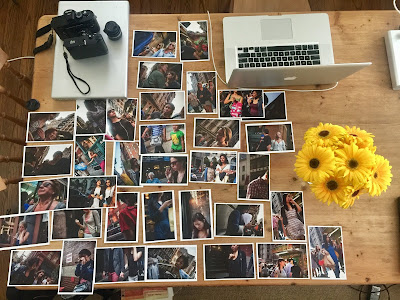 I'm breathing just a bit easier.  Mr. Tree came yesterday.  I asked how long the tree trimming would take, and he said five hours or so.  I said that I guessed that I would just take the day off from work, but he said not to.  He knew what I wanted, he said.  I thought about it.  What would I do if I stayed home?  Tell them how to do the job?  I couldn't go out and bully them.  They were all tougher than I. They would knock me out or just laugh at me, and neither scenario appealed to my sensibilities.  So I decided to go to work.

I was anxious all day because the work they were doing was dangerous and something might go wrong.  I imagined big limbs crashing into my roof, just the thing I was hiring them to avoid.  I stayed at work longer than usual.  I had work that needed doing, but I was in no hurry to be miserable or disappointed if things had not gone as I wished.  After work, I went to the photo store to get batteries.  The traffic was horrible, the roads crowded with people buying supplies after work.  On my way home, I stopped at the Chicken Licken' to get some dinner as Ili was having dinner with her parents that night.

When I pulled into the driveway, I saw the Mr. Tree's truck.  The owner was walking around the yard picking up little bits of debris.

It had taken longer than five hours.  He took me around the yard to have a look.  On the ground, there was no evidence they had been there.  In the trees, everything had been done just as we had discussed.  I felt better and even grateful.  But, I wondered, had I made a mistake?  Should I have had the entire tree next to my house taken down?

When I talk to people, there are two reactions to the potential storm depending upon whether or not you own a house and upon what drugs you are taking.  For renters, this is just adventure.  For those with prescriptions to help fight anxiety and depression, there is a general sense of ease and a belief that things won't be that bad.  For the rest of us. . . well, not everyone worries the way I do.

I watched some YouTube videos on Vivian Maier last night.  Jesus Christ, I love the story.  I love the work.  As I've said before, I used to correspond with John Maloof right after he discovered the boxes full of her work.  I wish I'd done more.

Here's a picture Ili took of the dining room table one day when I was printing out proof pics of some NYC street scenes.  Makes me look like a real artist.
Posted by cafe selavy at 8:32 AM