Awash in the Past 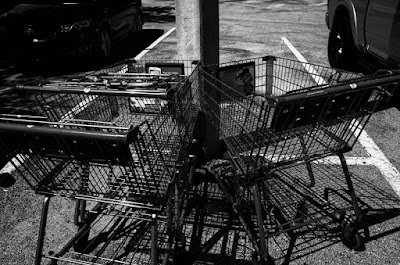 Obviously I have no other picture to post here.  Still, just the act of photographing something transforms it.  Who knows?  One day when we no longer have shopping carts. . . .

Last night, Ili and I watched "On The Bowery" (link).  Here's a trailer for the movie (link).  I told Ili that when I graduated from college and went on the road, I stayed in some missions where you had to hear a sermon before you got fed and got a bed.  The men were all tubercular, it seemed, and the mattresses were pretty filthy.  I had a sleeping bag which people greatly envied, and so I hadn't any real contact with the thing, but all night men coughed and spat.  I only did that once, but as a crazy young fellow who was reading too much, I had to experience it.  I had forgotten about that, really, until I watched the documentary last night.

Ili felt a little queasy by the end of the film.

And so. . . I searched for Playboy's Penthouse.  I'd never seen the 1959 series and didn't even know it was extant.  We watched the first episode on YouTube.  You can, too (link).  It is in seven parts, and somehow part five doesn't automatically come up.  You have to search for it.  The opening song was written and performed by Cy Coleman who plays throughout the show.  Holy smokes, I say, what a cool cat.  You are welcomed to the "party" by Hugh Hefner, of course, whose actual penthouse apartment is the set for the show.  The first guest you meet is Lenny Bruce who wasn't yet as famous as he was about to become.  Rhona Jafee and Nat King Cole and Ella Fitzgerald are guests.  It is the craziest show I've ever seen, and I have no idea how it could have been aired in 1959.  It was the first t.v. show where blacks and whites were shown as equals in a social setting--with actual cocktails!

Oh, and there are bunnies, too.  Sorry.

The show ran for two years.  I wish the rest of the series was available, but I can't find it.  It is worth the watch just to hear the guests use phrases I'd always associated with hippies--"groovy" and "far out," etc.  All while wearing cocktail attire.

I got the biggest kick out of Rona Jaffe.  But that is the way I am.

I'm not certain Ili got as big a kick out of it as I, so if you do watch it, we'll see who's sensibility you are more in tune with.  I may be wrong.  She may have loved it.  I may have simply been feeling guilty for commandeering our night with two things I wanted to watch.

O.K.  The day is calling.  If you watch either or both of these things, let me know what you think.
Posted by cafe selavy at 8:21 AM