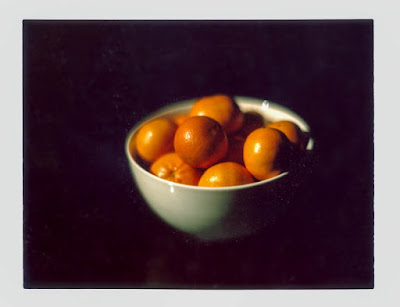 This is a scan of a Fuji instant film shot with the Liberator.  It was the first one I did on Sunday.  I was just trying to see if I could figure out the exposures with the ND filter.  Ili, for some reason, likes it a bunch. I've done nothing to it other than dust it.  Mandarins.  Mmmm.

I opened the news today and wondered: "Why do they play the National Anthem before football games?"

That, to me, is the real question.  What the fuck does football, or any sport, for that matter, have to do with patriotism?  Are football games really about honoring the nation's armed forces?  See, that is something I never knew.  99% of athletes have never nor will ever be part of the armed forces.

People in the stands can boo them.  They probably should before every game.  I would enjoy that most.  Paying $100 so your kid can watch a bunch of millionaires sport around seems worthy of some booing.

Of course, these are the same parents that put their kids into Pop Warner football, the same ones who should be locked up for child abuse.

You know, it is just hard being perfect.

I think those tough mothers from Antifa should take the field and show those football players a thing or two.  They should just punch them when they try to speak, the ones who oppose them, I mean.  Yea, those are some bad asses, those Antifa mother fuckers.  The new SDS. . . with a twist.

Is Antifa a group or a mob?  Everyone needs to surround themselves with like-minded people.  More persuasive that way.  As Hemingway said, "A man alone ain't got a bloody chance."

It's difficult being a man alone.

Anthony Wiener got 21 months in prison.

"Prosecutors had said in their sentencing memo that during some of these communications, Mr. Weiner 'used graphic and obscene language to ask the minor victim to display her naked body and touch herself, which she did.'”


"'The defendant knew this young woman was in high school and getting her learner’s permit, Judge Cote said" (N.Y. Times).

Those are my two favorite quotes from the trial.  Jesus.  Do they listen to what they are saying?

But here I am talking about topical things again.  I don't want to.  This, however, is really good (link).

And Antifa chants, "Lock her up, lock her up."

What a mixed up, muddled up, shook up world.
Posted by cafe selavy at 8:21 AM