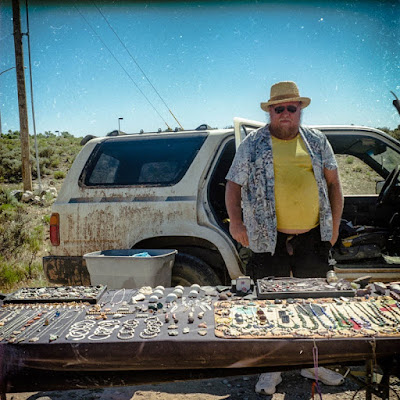 I shot this at the gorge outside of Taos with my Rollieflex.  It sat in the camera until about a month ago.  Then it took a couple weeks before I scanned it.  When I took it into Lightroom, there were spots and specks all over it, dust I guess, but it could be something in the film.  I had no interest in trying to clean it up.  It is not a great photo.  It is not a good photo.  It illustrates, however, the problems with working in film.  I love shooting with film.  Everything after that is the problem.  Other than being square, I could have shot this with a digital camera.

Yesterday, I picked up my 4x5 Liberator from the repair shop.  I took it in to have a filter ring attached so that I could use a neutral density filter on it.  Don't worry about what that means.  The nice thing about shooting with that camera is the out of focus area that you can't get with a digital camera.  It is exciting.  But. . . I have even more work to do to get an image.  After shooting 4x5, I can't run it down to the photo shop for processing, so the film sits until I have time to develop it which is a bit of a chore.  And after an hour of work, I'll have a few negatives which I then have to scan and take into Lightroom and Photoshop.  Wash, spin, rinse, spin, repeat.

If I sold all my film cameras, I'd probably have enough for the Leica M10 that I want.  But why?  There are more useful digital cameras.  It is a style/romance thing with the Leica.  And that is where I get in trouble shooting film.  It is where I get into trouble doing everything.  I am NOT practical.  I don't like or want the practical life, really.  It is the same way I feel about cops, kind of.  I don't like them until I need them.

Right now, there are all sorts of practical things I need to be doing.  As a result, I believe, I haven't felt well.  It could be germs brought by the hurricane.  Hurricanes bring all sorts of undesirable things, and the state smells like an open sewer right now.  Not in some places, but every place.  And people have been feeling ill.  But I believe much of it is that there is so much that needs to be done.  Practical things.  Repairs, cleaning up, etc.  And each thing that needs to be done reveals another.  Suddenly life is not dreamy and romantic but work-laden and crappy.  If you are rich, you can pay to have things fixed, but I, like others, am not, and so, like others, I believe, I get depressed.  And then the sickness.