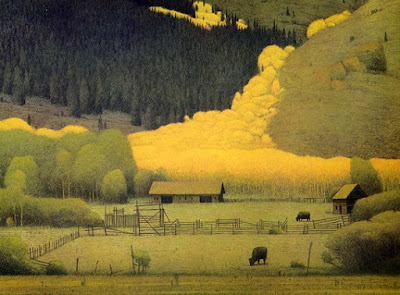 I am tired when I get home in the early evenings.  I manage to fix dinner and clean up the kitchen.  I have fallen into the habit of watching t.v. at night.  It started with watching the news again in the era of Trump, but I couldn't keep watching the predictable horror show constantly, so I switched to YouTube where there was a seemingly endless number of fascinating old documentaries.  That led to watching a series, and now it is the Ken Burns "Vietnam" thing.  It is a horrible habit that needs breaking.

And so last night, I did.  After a dinner of healthy tacos, and after the kitchen had been cleaned and put into order once again, we went for a scooter ride.  Since we were already in our pajamas, I suggested we not change, but we realized that we needed something at the store, so we got dressed for the outside world again.

As we cruised past the lake, we realized it was the last day of summer.  The sky was robin's egg blue and flamingo, the air the coolest it has been in months.

Sometimes you just have to make yourself get up.

Yesterday, too, I realized I had been sending out a lot of obits from the N.Y. Times, people my friends and I would miss--Jim Harrison, Harry Dean Stanton, some sports heroes from the sixties, etc.  It must have something to do with aging, I think, this interest in morbidity.  But it is not that so much as it is watching my world get smaller.

If you are scratching your head and wondering, "Who is Jake LaMotta?" watch Robert DeNiro in "Raging Bull."  You'll see.

Now, it is the first day of autumn, the Eternal Equinox.  At least, that is what my friend suggested to me when I sent him the obit.  I'll take the autumn.  It is winter that will be most difficult.

Today's image is a Russel Chatham painting.  The Riddler of the Autumn fellow once owned some of his work.  I think he still has some.  I met Chatham in Key West years ago.  He and Jim Harrison were part of my little Thomas McGuane and his old girlfriend story that I have told on this site already, maybe twice.  He and they are part of "the old world."  His is, I think, as Little Edie sort of says, the best painting for they day (link).

I will get over my morbidity and lazy ways and make my way into the autumnal world again.  It is the best time, a beautiful time.  And, as Robert Frost invites, "You come, too."
Posted by cafe selavy at 7:53 AM