A History of the Future 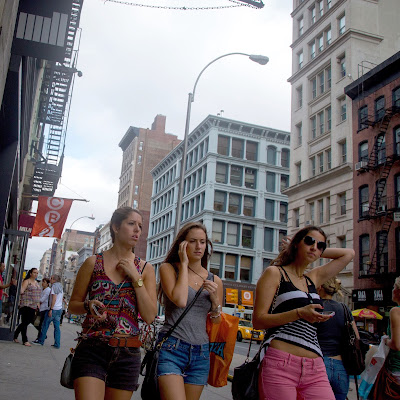 C.C. sent me these quotes from an article about a showing of Wim Wenders' Polaroid pictures.

Wenders, too, now regards photography as a thing of the past. “It’s not just the meaning of the image that has changed – the act of looking does not have the same meaning. Now, it’s about showing, sending and maybe remembering. It is no longer essentially about the image. The image for me was always linked to the idea of uniqueness, to a frame and to composition. You produced something that was, in itself, a singular moment. As such, it had a certain sacredness. That whole notion is gone.”

"The culture has changed. It has all gone. I really don’t know why we stick to the word photography any more. There should be a different term" (link).

That's the kind of thing a certain kind of person says one day, I think, but we could say that about every art form, couldn't we?  I think more likely it is over for Wenders.  For me, it is just beginning.  In a couple of years, I will do nothing but take pictures, millions a week.  I will be in a mad rush to record all the things I've been unable to while chained to the factory.  I'm not letting Wenders take this shit away from me.

By the time I get to do that, "sexy" will be a thing of the past, vilified as a male construct.  Beauty is already being redefined.  But as soon as this new version is codified and has become the new order, there will be a great nostalgia for the old days and the old ways.  This is not some mystical forecast on my part.  The new order is never right.  It is simply new.  And once it takes hold and the masses have a chance to massage the idea, the whole thing goes to shit.  Everything goes to market, as they say, and then it is the market's and not the theorists.  My theorist friends are already pissed off about the way the "undereducated" misuse new order ideas.

An idea is impossible to control.  When the dirty little fuckers get through with it, you begin to regret everything.

"Look what we've done!  It was never supposed to be this way!"

All that is left is refuge in the ideas of the past.  Nostalgia.  That's why all the kids want film cameras and record players.  It is hard to believe that people don't want to live in the world you've created.

Hell, those girls with their short shorts and crop tops could be the end of an era.  Only heroic men who get titties will be dressing like that next year.  But we'll turn on them eventually, too.  Too much of the old femme there.  And then all the corrupt old bastards will be trying to date Brazilian trannies.

And there you have it--the history of the future.  Me and Wim telling it like it is.

Poor bastards.
Posted by cafe selavy at 8:59 AM