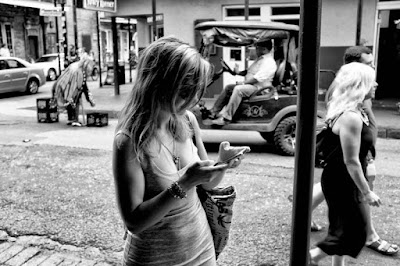 Yesterday's attempt at photographic endeavors was fairly spectacular in a disastrous sense.  Much went wrong.  I accomplished little in the way of making images.  And yet, something may have emerged from the flames.

The weather was beautiful after a front moved through.  Clear, blue skies, brilliant light, low humidity, cool air.  Mid-morning, I went for exercise at the baseball stadium.  I have a routine I have done there for decades.  Oh, lord, I could feel the past couple weeks of illness and antibiotics.  I've a long road back.  After a shower and a too healthy brunch, it was just after noon.  I thought to take my cameras out and try to make some pictures in a crowded market downtown.  In a t-shirt and linen jeans jacket, I got on the Vespa.  It was a stupidly cold ride that I knew was going to make me sick.  I went slowly trying not to chill all the way to the bone, but I had nothing to stop the wind.

When I arrived, the market crowd looked unappealing.  I did not want to join them in their romp around the lake.  What I wanted was to go home and get warm.  I circled once and left.  The way home seemed colder.

At home, I put a heating pad against my chest and sat for awhile absorbing the heat.  I left it there for about fifteen minutes, alternating between my chest and my head.  I did not want to get sick.

Sunday afternoon loomed.  I'd failed to take any pictures.  Was it the cold that stopped me or was it something else?  It was a 50/50 proposition.  Maybe 40/60.  I was fragile in many ways.

"Do something!" my inner voice yelled.  It is too easy to do nothing.  I am a "head case" in that sense.  I can sit and stare and think for much too long.

I went to the garage and got a Polaroid processor, the last of three, and some film.  I wondered if the mechanical failures I've been suffering were the fault of the processing tray, the film holder, or the processing machine itself.  I set everything up on the dining room table.  I ran expensive film through trying to see what was happening.  Nothing worked, and after an hour or so, I gave up.  I was cleaning up when I heard a small but loud explosion.  Then I smelled the electrical smoke.  I could see it rising out of the processor.  I unplugged it and set it outside.  I think it was on fire.

I don't think I'll be shooting any 8x10 instant film.  Too bad for Polaroid/Impossible.  They offer no help in this matter.

I made trips to and from the garage, carrying equipment and testing my big Epson printer.  One of the heads has a clog now, and I was trying to clean and clear it.  No luck.  The orange channel will not clear.  If I can't fix this, the printer is done for.  Things look pretty dire.

I decided to take a look through some of the many boxes of prints I have stored.  I haven't seen them for a couple years now.  There are many hundreds of big ass prints, some 16x24, most larger.  I had an idea that I would pick out the best of the images, cull them from the chafe.

I brought a big container back to the house, opened it, and one by one lay the pictures on the table.  It is stunning how many prints there are.  Beautiful.  But what am I going to do with all of them?  I don't want to keep them any more.  I don't need them.  I printed them to keep the printer healthy.  I printed them to see.  I thought to just start burning them along with the confidential stuff I had in the fire pit.  I tore a few up, ones that were flawed in some way, but I couldn't sustain it.  There are too many to give away, I thought.  Or. . . maybe I could sell them as untitled artist's proofs for a couple bucks.  How much?  Twenty dollars?  I had no takers at fifty.  Where would I sell them, though?  There is something about seeing the big print that is more powerful than seeing them as images on a small screen.

Then I thought it all bullshit.  Why would I bother to do that?  My thoughts turned to destruction once again.  I didn't have it in me to go through another container.  The afternoon was drifting away.  I had done nothing productive so far.  I got out my film cameras whose rolls had not been finished.  The Leica M7 had about ten shots left.  The Olympus XA around the same.  The Leica CL about fifteen.  The Leica R5 about that, too.  I decided to take them out and finish off the rolls on each one.  I put them in a bag and went back to the scooter, this time for a half mile trip to the Boulevard.  I pulled up in front of the Starbucks and parked.  I pulled the little XA out of my pocket.  It is tiny.  I wanted to see what exposures I would be using with the non-automatic cameras.  As I framed up the GAP store window to my left some people walked by.  Click.  I looked up at the sky then back to the sidewalk.  More people.  Click.  It is more a whisper than a click, really.  Before I got off the bike, I had finished the roll.  None of the pictures would mean anything, but that was o.k.  I wanted to develop the film in a new developer anyway just to see how the images look.

I got of the scooter and rewound the film, and when I tried to open the back to remove the film, I dropped the camera onto the brick street.  When it hit, the back popped open.  Shit fuck goddamn.  That was a far fall.  I picked the camera up and closed the back, or tried.  It didn't want to shut.  I fooled around a bit and took out the roll.  WTF?  It was a shitty old color film made by Kodak a long, long time ago.  Not a good film, but a cheap film.  I remembered loading the film some months back out of a drawer full of old, weird color films.  O.K., O.K., I thought.  Whatever.  I put the film roll into my bag and got out a roll of Tri-X.  I tried to load it, but something didn't feel right.  Maybe I busted the camera for good.  Finally, though, I got it onto the take up spool and closed the back.  It wasn't the easy closing that it was.  I wound the film through.  It felt hard.  I took a picture.  Wound again.  Still hard.  Click.  I put the camera away not sure if it was working or if something was off.  I grabbed my M7 and started to walk.

I saw myself in the store windows.  I looked alright.  But the camera made me self-conscious.  When I walked by sidewalk tables, people looked at the camera, looked at me.  I might have had a hand grenade.  When I got to a corner, I put the camera to my eye.  The meter read out in the viewfinder was going crazy, flashing numbers and letters in the LED.  Great.  As I looked, some people walked through the frame.  A man waved crazily, but I was not taking pictures.  Then I did.  I stood there and tried to get the camera to settle down.  It never did, but I shot through the roll.  Again, nothing useful.

With that, I gave up.  I walked back to my Vespa thinking that as a photographer, I was done.  What had the day yielded?  A processor that blew up, two broken cameras, and a desire to throw away my prints.

By then, it was time to go have dinner with my mother.

That's the sad true tale of the day, I'm afraid.  I woke this morning to temperatures in the forties. The sky is clear and the light is brilliant.  I had thought to take today off, just play hockey and go take pictures, but that was yesterday before the deluge.  Now I have sat too long to go to the gym.  I will get into the shower and make my way to the factory.

It is a life extraordinaire.
Posted by cafe selavy at 8:55 AM