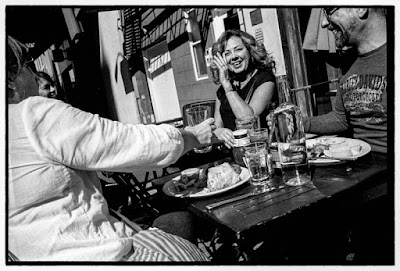 Black and white film scan.  Better than digital captures for some reason.  I don't know why.  I can't put my finger on it, but when they work, I here a cosmic "ohmmmmmm."

I have some film waiting to be processed now.  So painfully slow in the contemporary world.

I drank water yesterday.  It is terrible stuff, but other people do it, and Ili tells me it would be good for me, especially my joints which seem to have given up, so I decided to shoot for the recommended half gallon of water.  I think that's what they mean when they say "eight glasses of water a day."  "Glass" doesn't have a quantifiable definition, so I assumed it to be 8 oz.  I drank water in 12 oz. gulps.  I don't enjoy sipping on water the way people with those annoying screw top plastic bottles do.

I just have to get it down.

I thought pee was supposed to be syrupy?  Little uric acid crystals, perhaps.

Oh--that was straight water.  I'm not counting the half gallon of coffee and the beers.

"Sunday is here; it will pass quickly. Sunday is the weekend's evening, many spend it relaxing in preparation for Monday. It seems as if we should get paid for Sunday, maybe half the normal rate, We're not really working but neither are we free. Not like a Saturday, in which something unexpected might happen, the enchanting glow of possibility. Sunday is a day for making a roast, and knowing how the day will end. It resolves far more mysteries than it summons."

He's nailed it.  I hate when he does that.

And just as I wrote that, Q texted me that he has been evacuated from his home due to wildfires.  That's terrible.  But now, at least, he'll be able to write about Mondays.
Posted by cafe selavy at 8:04 AM