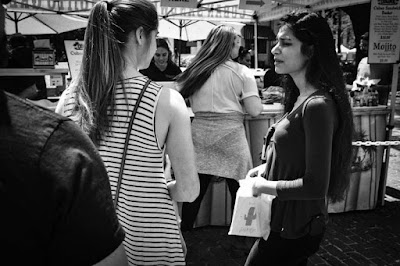 I felt like poop yesterday, but it is no good lying about, so I tried things.  I really did.  None of it worked.  I got Ili to agree to sit for some pics.  I found another developing tray for the Polaroid 8x10 processor I just bought and wanted to see if it would work.  It was a huge surprise finding that tray.  I've been looking all over the internet for one.  They are impossible to find.  I thought I had one, but I have so much photographic equipment, I can never be sure.  I stumbled upon it in the house and so. . . .  I wanted to shoot some regular film, too, and try it with the New55 R5 monobath developer.  Shoot the film, put it in a tray in the developing tent, and in less than ten minutes, the negative is done.

I just wrote out all the steps I had to go through to make the images.  Then I asked myself, "Why?".  Boring.  So. . . simply, I made both the instant and the not so instant images.  Ili was intrigued by the big camera and the elaborate process, or so she pretended.  She followed me into the other room where I had set up the Polaroid processor.  I put in the receiver sheet and the film holder just as they should be and pushed the button the started the motor that turns the rollers that squeeze the two together breaking the chemical pod that spreads the developer.  Oops.  Boring.

It didn't work.  I tried it for about half an hour, over and over.  Nope.

I decided to move on.  I had shot two sheets of film.  I set up the tent, heated the developer. . . again, oops.  I'll cut to the chase.  It didn't work.  I thought about that and wondered if that holder hadn't been loaded with color film.  It didn't look right.  So. . . I loaded a sheet of black and white film where the last sheet had been and asked Ili to come back and sit again.  Took the picture.  Returned to the tent.  Ten minutes later, no image.

I am stymied.  I want to make pictures with that big old camera, and I'm going to figure this thing out.  Like everything else, this process needs practice.  I keep flubbing things up when I'm working with it.  There are ten or so knobs that do a variety of things.  The camera will move in about twenty different ways.  Working with the 8x10 is much, much different than anything else in photography.  It is a pain in the ass.  But last night, I thought/dreamed about making pictures with it.  I tried to summon up subjects.  What would I do?  I thought of some things.  They were all a pain in the ass.

In the end, I took some pictures of Ili outside using the 4x5 Liberator with some of the now defunct Fuji instant peel apart film.  They came out dark.  Then I picked up my old Polaroid Spectra camera and shot some of the New Polaroid Instant film, two of the colored ones, then, when the pack went empty, I loaded up the black and white.  Worked like a charm.  I have to say, that black and white film is pretty.

Today I read that Fuji is releasing its own wide black and white films for their cameras.  I don't have one of the Fuji Wide cameras.  What I have is a bunch of shit that ain't working.

Maybe the New55 chemicals got ruined by the color film.  Oh, I forgot to tell you, I checked the notches in the film, and it WAS color film that I shot the first time in the 8x10.

I think I'll try another picture today before work just to see.

But I keep wondering--"What the fuck am I doing?"

Just being stupid, I guess.
Posted by cafe selavy at 7:53 AM