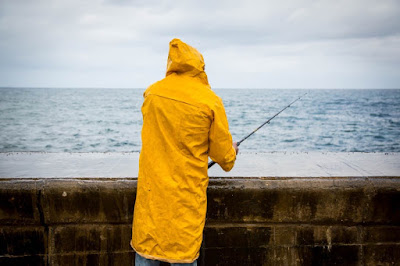 Ili came home after midnight.  She is still asleep this morning, recovering from a long day's travel and two time zones.  I feel like shit this morning, the pain in my side frequent.  How long does it take for antibiotics to work?  They only last through Wednesday.  I'm getting worried.

But I have to beware of complaining.  Nobody wants to deal with a sick person.  Nobody wants to hear about something they can't solve (it is o.k. to use the singular "they" now).  So. . . quiet suffering.  Except here, obviously.

In the end, we are all lone fishermen wondering why we cling so desperately to this existence we find so often find cruel and meaningless.  Yet, according to Camus, we do.

Coming out of the hospital after midnight, there was an obviously mentally deranged woman standing on the sidewalk opposite the hospital screaming to herself in an angry argument with what I assumed were absentee doctors and nurses.  She was giving it to them good, cursing like a champ, waving her arms, her whole body gesticulating in an angry, murderous dance.

"Goddamnit, I need a drink and a cigarette.  Fuck you, motherfuckers.  I'll do whatever I goddamn want to do, you pieces of shit."

I had to walk within feet of her to get to the garage.  She was tougher than I, I knew, lived life without  as much fear as the "normal" person.  No, I didn't know.  I was guessing.  Maybe it was all a reaction to the horror show she lived.  I'll never know.

I took the touted walk yesterday, then worked on a Polaroid 8x10 processor that is broken.  Unsuccessfully.  If the New Polaroid company or whatever the Impossible Project has decided to call itself wants to sell its 8x10 film, they need to come up with the hardware to process it.  Using thirty and forty year old equipment that is falling apart more rapidly than it can be repaired is not going to cut it.  I'm giving up, and they are losing a client.  I've been suckered in by them and the New55 projects for the last time.  I've spent too much money trying to keep them afloat in hopes of working my magical powers in a way that others will envy and wonder about.

I'm ready to stick to digital.

What is really crazy, though, is that photography has devolved to the worst possible images ever made in its history.  EVER.  The first processes were difficult, but they yielded such beautiful things.  Daguerrotypes, wet plate collodiofn, autochromes, then, with the invention of roll films, dye transfer and Kodachrome and Polaroid.  Now, we have digital images printed on ink jets that can't begin to match the beauty and depth of those old prints.  Fuji is further cutting down its film offerings.

If there were only a good way to print the digital images with the colors of a dye transfer.  WTF?  And nobody even knows how to make an autochrome.  For real.  Or a Polaroid, either.  Those processes have disappeared forever.  It is hard to fathom.

So I can shoot black and white film, but to get a really good print, I need a studio were I can make palladium and platinum prints one by one.  Barring that, I would need a darkroom.  There is one other thing I can do, but it is expensive.  I can send off digital files to be printed and developed on black and white paper.  But I can't do that around the house.

Have I whined enough today?

There is an incredible fall festival at a catholic church that has been going on all week.  I haven't gone for something like a decade, but if you have been coming here for a long time, you saw pictures of it many, many years ago.  It is unbelievable that a church can put on such a show, but I have to say, they surely know how to make money.  They simply charge the vendors.  No risk.  If I feel like staying upright today, I will take Ili and a camera.  I don't make any promises.  Even if I go.  But the weather and the light lovely, and if I get a miracle and can be healed to a greater extent today. . . .