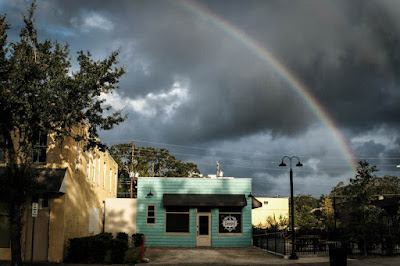 Friday the 13th and Octoberfest--a combo.  I chaffed at the bit all day at the factory, and so when my boss went to a two hour meeting at 2:30, I waited a bit before I cut and run.  I was staying in Grit City that night, and I had cameras.  I was ready to go try my luck at being a photographer again.

An hour or so into it, I had a couple snapshots of poles and draincaps.  I was off.  I didn't have it any more.  I was sweating in the southern heat and humidity.  Ili called.  She would be coming soon.  I told her that I thought I would stop and get a beer at a little craft beer place.  O.K.  She would meet me.  I walked in to order feeling clumsy and awkward.  I bumped into a pole.  I felt all the tall, bearded hipsters give an unnoticeable smirk.  The old fuck is killing the vibe.

I took my beer and sat outside away from the crowd so that I could look over the street.  Everywhere people were setting up booths for Octoberfest.  I felt puffy.  I took out my phone and began texting myself a sorry missive about how I was no longer able to make pictures, wondering why.

In a bit, Ili showed up.  I got her a gin and tonic.  Double.  I was worried since it was the 13th and all.  I told her about my inabilities.  She succored me.  Then the owner of the bar came out and commented on the cameras.  Ili took a couple pictures of him.  And while we were talking, a family with a crazy little girl walked by.  Ili paused, then in a second she jumped up and ran after them. 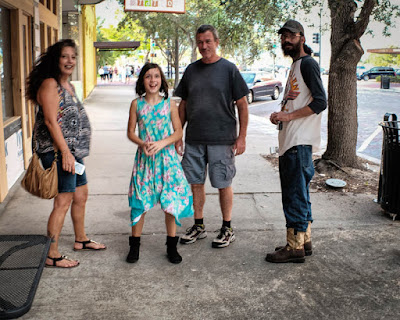 Ili's got the bug.  Now all she has to do is learn how to use a camera.  She'll be able to take over all of mine.  Me?  I need to live with my cameras 24/7 again until they seem part of my hand and not a live grenade that I'm holding.

Now it is Saturday and time for a walk around Grit City.  It is just an exercise at this point, I guess.  But I'm sure Ili will take some pictures.
Posted by cafe selavy at 10:06 AM