I Can See The Future From Here 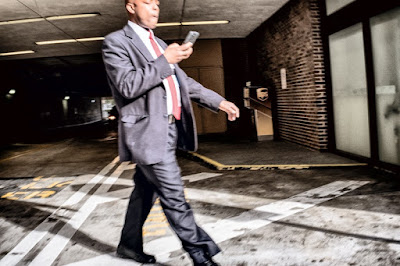 I'll admit it.  I've not been in the best state of mind recently.  And maybe it is starting to wear on me a bit.  I'm making mistakes.  These are not good times in which to make mistakes.  Daggers are drawn. People are willing to sacrifice the innocent.

In my rush to make yesterday's meeting, I got there an hour early.  I had the time wrong.  When everyone showed up, it was not the meeting I thought.  The CEO is retiring, and this meeting was run by a headhunter group hired to find a new one.  They were seeking input from the company executives about what qualities they thought the new CEO should have.

I listened for about ten minutes before I raised my hand.

"Well. . . this all sounds like it came from a Wiki page under the heading "Qualities of a CEO."

I went on from there, but there was an audible rumbling in the room.  Why in the fuck did I say that? It wasn't smart.

My day got no better.  I tangled with people over and over again, people of equal or higher standing in the company.

It's Trump and the environment he has created.  That has to be it.  We're all going to get microwaved to death sooner or later because of him.

My week doesn't get any easier.  I don't know if I'll even have time to take a walk in the next three days.  I'm not having fun.

My buddy sent me an interview with the painter Russel Chatham from which this comes:


“I’m not a businessman. If any money crosses my path, it is gone faster than butter in an oven. I have no savings, no retirement. I have whatever’s in my wallet."

I start thinking about the future.

This morning, front and center on the N.Y. Times page, there's this. 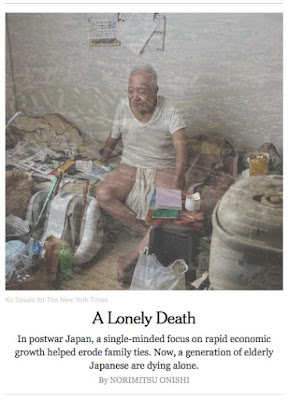 Here are a few excerpts.

“Everybody around me has died, one after another, and I’m the only one left,” she said. “But when I think about death, I’m afraid.”

When I first met Mrs. Ito, it barely occurred to me that no one else had called or visited that afternoon. Only weeks later did she tell me — excitedly, as if she had been waiting for me to ask — that her birthday had fallen on the day of my first visit.

Instead, she had simply handed me her book: “Chieko’s 53 years in Tokiwadaira danchi.” It was an encyclopedia of dates, names, events and photos spanning 394 pages. No one else had read it, and it wasn’t clear then, even to her, why she had gone through the considerable trouble of composing drafts in longhand, typing it up on her laptop and printing it out.

“Writing is such a hassle, so it’s strange, this need to write,” she said.

Ito ultimately concluded that she had started writing to break the solitude, so she wouldn’t forget. “Even the unhappy events,” she said. “Otherwise, everything is lost forever.”

Sitting in Mrs. Ito’s apartment, I remembered that she had mentioned a collection of photo albums of her balcony. I asked to see it, and she immediately pulled out 11 slim albums cataloged with her typical precision.

But the photos in these albums were all of flowers, flowers that Mrs. Ito had kept on her balcony since her daughter’s death — amaryllises, geraniums, carnations, roses, morning glories, narcissuses, marigolds, every flower, it seemed, with the exception of chrysanthemums.

I sent this to friends with a comment: "I can see the future from here."
Posted by cafe selavy at 8:40 AM