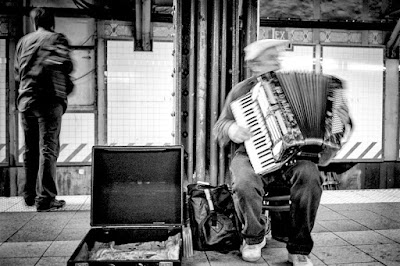 Turn of the century, NYC subway.  Why did I ever let other people keep me from being accomplished?  Q says because it was easier that way.  Of course.  It is better to let other's take the rap.  I've never had a mate, however, who applauded my artistic endeavors.

Remember the turn of the century?  You could still walk to the airplane gate with your friends five minutes before takeoff to say goodbye.  No?  Well, that was all in the bad old days.

I am finding that there is still at least one group against whom you can discriminate and make fun of in public.  The aged.  They represent everything that we want to expunge--the bad old past.  People were really stupid then and life wasn't close to being fulfilling.  People couldn't live up to their full human potential.  So sure, the old SHOULD be ridiculed.  What ideas they had.  And they always want to talk about shit nobody cares about.  Even the semi-lucid ones who were college educated back when universities taught hierarchically will reference old Greek pedophiles or some such nonsense.

They are the ones that said, "Never trust anyone over thirty."  They get to own that now.  They need to deal with it.

O.K.  I'll quit it.  But it is true, right?  You can stereotype old people and no one will get upset.

One of my friends told me about a bill congress is trying to pass that restricts access to pornography by age appropriateness.  People in their fifties, people in their sixties. . . they could only access images and videos with people of their age group.

He may have been kidding, but it wouldn't surprise me.  Much.

Still, this picture makes me happy.  Q tells me he is going to post one of my other pictures from this trip to NYC on his blog today.  It will take him a while, but later, let's go see.