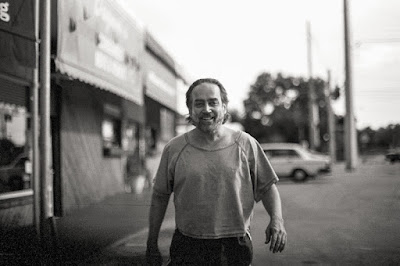 I went through an old portable hard drive yesterday that had pictures from the turn of the century, back when I took pictures for fun.  I took a lot of them.  I was chronicling my life, for whatever reason we do such things, snapshots I always called them, but snapshots are the true chronicle of the world.

This is a fellow I knew from a famous old gym.  He was just one of the number of crazy "characters" that I should write about.  I was friends with them.  They were a strange bunch living on the margins of society.  This fellow was known by different names in different places for different purposes.  He had a great punch and could knock a fellow out even though his hands were small.  But that is for another time when I tell stories without pictures.  I am not about to rat this fellow out in a public forum.  Al those stories will have to be told as fictions, or at least with pseudonyms and without photographs.  Like I said, I was friends with them and there is a code to which I must adhere.

This was taken with an old Nikon film camera.  It was fully manual.  Why are so many of my pictures taken when photography was more difficult more pleasing?  I will probably post more.

I'll just say he ended up going to prison for a while because of another gym fellow who was trying to stay out.  The story is on the tip of my tongue, but. . . .