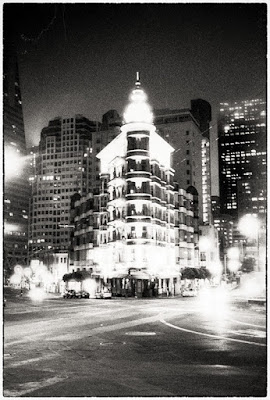 I didn't have time to go through the old pictures and get them viewing ready yet, but this morning as I looked at them and tried to pick one, I realized that I would need to write a narrative to put them into context.  I would need to write some stories, and writing stories takes time that I don't have today.  This picture is from the turn of the century in San Francisco.  I had purchased my first rangefinder camera, a Voigtlander R with a couple of screw mount lenses.  It was fully manual and one of my favorite cameras of all time.  It was stolen from my car with the other $16,000 worth of gear.  Maybe I miss this camera most, but that is a difficult call.  I was on my own on this trip, walking the streets, experiencing things, though I was meeting up with an old friend some just to take the lonely edge off.  It is amazing to me how well these old cameras did at night with Tri-X film.  I look back and wish I had shot a lot more.  I think this is the Coppola building where their productions company is located, but Q will let me know if I am wrong.  Just a glittering city on a beautiful July night.

After work yesterday, I was at the Cafe Strange once again sipping a strong ale and writing down my woes.  You see. . . I have them, and they are getting me down lower than I want to go.  It is a combination of health and life choices, and it seems I'm not able to do anything about either of them but suffer stoically.  That is O.K.  But man, in the middle of the painful night, sometimes now, I don't know.  My heroism seems to leave me.  As Hemingway said, at night it's another thing.

As I look around the cafe, I see "Blue Velvet" or some other David Lynch work.  These are characters and I need to figure out how to photograph them.  Characterology 101.  It should not be allowed to disappear or even fade.  They are the faces of the times.  But taking pictures today is not as it was even a decade ago.  Everything, especially someone like me, is suspicious.  Everyone is afraid of being exploited, of course, and why let someone take your photograph when you can do it yourself?  I don't blame them.  It just makes me sad.  How do I become a trustworthy chronicler?

I'll try to figure that out.

Meanwhile, I have other problems to face.  If I can only get back on my feet in the old sense, feeling well, maybe I can face the world with some grace again.  Losing your mojo is one thing, but losing grace is another thing altogether.