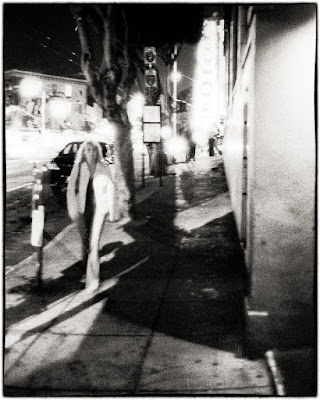 I took a step yesterday toward making pictures again.  I went out with the cameras and actually took them out of the bag!  I walked around an "art festival" that circled the lake downtown with my Olympus XA and my Leica M7.  I shot all film.  Not sure if that's really the thing to do in a crowd.  I could have gotten more and maybe better pictures with the Fuji X100, but shooting with film is thrilling.  I shot two rolls, one from each camera, and rode my scooter to the Cafe Strange to think about it and have a mimosa.  Oh, shut up.  I can drink mimosas if I wish.  So I sat and wrote and thought about things feeling as if I'd started a bit.  Just a start.  I didn't expect there to be anything worthwhile on the film except the last two shots I took of a woman and her dog.  She posed for me.  It was the first time I'd actually talked to someone about taking a picture for a very long time.  And this is the start.  Connecting with rather than putting off.  I must get easy with myself again.

I came home and pulled out the developing tank and reels and chemicals and tent and thought through the things I needed to do.  I decided to develop just one roll because I didn't know if the developer was still good.  I got the roll on the reel just fine and brought it out of the tent and began the chemical process.  Half an hour or so later, I pulled the film off the reel.  Voila!  It worked.  So I decided to develop two other rolls that have been sitting around.

And then things went to shit.  I couldn't get the film to line up on the reel.  Each time, it got off the track, and the more I worked with it, the worse it got.  Finally, in frustration, I just put it on.  The second one was a pain as well, but after a struggle, it felt like it was on fine.

Pulled them out, poured the chemicals, and half an hour later--I was right.  One roll was not on correctly so half the frames were touching and didn't develop.  The other one came out alright.

Frustrating.  And then, of course, I had no proof sheets to look at.  I am thinking that it is not worth developing my own film, though I probably saved myself twenty bucks.  I don't know.

Fascinated?  Yea, I know.  I could have told you all of that in four sentences.  But then I would only have gone on to complain about how the time shift has fucked me up.  Or I would tell you about the existential burden of living alone in the night again.  Or both.

I've decided to go try to develop the other roll of film right now.  This will be the deciding test of my abilities.  If I fuck up this time, I'll send it all off to the lab from now on.