The Enemy of Action 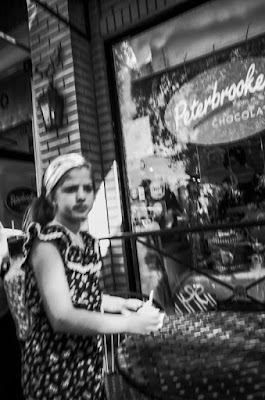 I like this picture more than most.  When I saw it come up on the screen in Lightroom, I just stared for a long time.  What did I do here that I can recreate?  It is as if I smeared the photograph, wiped some solvent across the face of it.  Whatever.  I am talking too much about the image.  Let us just look at it.

I moped horribly yesterday.  It was a horrible day.  I went early to exercise, then came home and started some much needed weeding.  I told myself I would weed for half an hour.  After what seemed much longer than that, I put the weeds I had pulled into the yard trash and came inside.  It had been ten minutes.  I couldn't believe it.  I would have bet forty.

I had planned to do other productive things, but after I showered, I ate a slice of pizza from the night before with a fried egg on top, and I poured a mimosa.  Somehow that didn't work for me.  I decided to get on the Vespa and go to the city to take some pictures.  When I got to the market, it was pretty deserted.  It was as people-less as I've ever seen it.  I decided to drive through the downtown, but that was fruitless as well.  I turned the bike toward my distant home and the clouds rolled in.  The day was turning ugly.  I made it to the house just before the spitting, intermittent drizzles began.

I had written my mother that I would cook dinner.  I checked, and she hadn't responded, so I went to the grocery store and got the fixin's.  When I got home, I had a message from her that she would cook.  That's the way it goes.  So I had another mimosa and decided it was a good day to start cleaning up the study which has become a photography dumping ground.  I need to organize badly, but I am not good at it.  Overwhelmed, I sat down and stared.  And stared.  And then I began to think dreadful thoughts and fell ever deeper into depression.

And that is how I spent the rest of the day.

I went to my mother's for dinner and was able to finish setting up the Apple TV that I had given her.  I told her to begin by watching "Madmen."  I told her what it was about, and that started us down memory lane, remembering this place before the big fantasy industry came, before there were people.  It was a freaking wonderland of adventure and beauty.  We talked about that for the rest of the night.

I had a scotch waiting in the car for me for the drive home.

I bought a Fire Stick from Amazon and sat down to set it up with my apps.  YouTube works differently on Amazon than it does on Apple, and somehow I got my YouTube account.  I spent a lot of time watching things I've made or things I've watched before.  I watched some videos on Lee Friedlander, and then I wanted to be a photographer again.  Maybe it was that or maybe just listening to music, but something made me feel better.  Sitting on the couch with a drink, I thought of what I could do again, what I should do.  By the time I went to bed, I felt alright.

Woke at five, the house chilly, somehow the covers not quite covering all of me.  What the hell.  I got up and began my day.  Now I've read the news and drank the coffee, and I wait to see which version of me will show up.  I am not going to the factory today, so I can do anything.  Or I could do nothing again which would be terrible.  What was it I thought of last night?  What had I remembered?  It wasn't a thinking memory so much as an emotional one, just a buzz that ran through me.

I am good at doing things in my head in the future.  I am great at it.  The present keeps tripping me up, though, that actuality of things.  And I forget.  What was it?  What had I planned?  It is hard to remember.

Action is the enemy of thought.  And vice-versa.