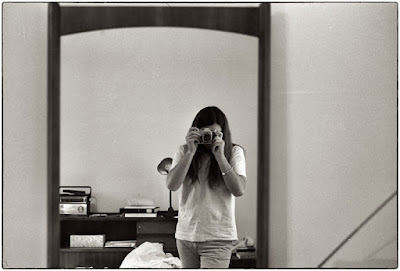 Here is the first known picture of me that taken with MY first camera.  I bought it with my own money.  I am not really sure why I did this.  I don't even remember where I bought the camera now.  It was a Mamiya.  I had two lenses, I think, a 50mm and a 24mm.  It had a hard black plastic case with a handle.  I never bought a soft case.  I know I had seen "Blow-Up," and maybe that had something to do with it.  But I started taking pictures right away with the help of a Kodak guide.  You know, put the sun over your shoulder, don't put the subject in the middle of the frame, etc.

This was taken in my first apartment.  I had a third operation for a cyst at the base of my spine.  The doctor I went to for this operation was pioneering a new technique--on me.  It required me to be in bed for months and to have a v-shaped wound that my mother could put her hand into bathed, dried by lamp, and powdered three times a day.  That is all I could do.  So I had an apartment near to where my mother worked, out on the edge of town, in a brand new single story complex.  I had a bed and a dresser, a lamp and the radio you see in the mirror, and a black and white portable t.v. the rabbit ears of which you can see, too.  There was no furniture in the rest of the apartment.  My mother came by before work, at lunch, and on her way home to feed me and take care of my wound.  Once a week, I would lie down in the backseat of her car, and go to the doctor's office to have the wound scraped raw with scissors so that it would not heal but would keep filling in.

Does that sound awful?

It must have been for my mother.

So for those months, I lay in bed and watched the little black and white television and listened to the radio and played chess against one of the first chess computers made.  It was a smart assed little computer that would insult me when I made a silly move.  It was 1973.  Texas Instruments had not been making pocket calculators for very long.  Bobby Fisher had won against the Russian, Boris Spassky, to become the chess champion of the world.  I bought a bunch of chess books and studied openings and mid-games.  I never got to the end-games.

So early in the morning, my mother would unpack my wound and I would get into a bathtub that she had laboriously cleaned and sanitized, and I would lie there for half an hour.  Then I would lie on my stomach on the bed with a heat lamp shining only inches from me to dry the wound.  After that, my mother would sprinkle a yellow sulfa powder into it, pack it with gauze, and tape it.  Breakfast would be ready, usually bacon and toast and eggs.  Then she would go to work and I would turn on the morning shows.  I probably watched "Dialing for Dollars" until ten, then "Andy Griffith,"  "The Beverly Hillbillies," "The Dick Van Dyke Show," "Bewitched," and "That Girl."  After that, the t.v. would go off as the only thing on was soap operas. My mother would come and eat lunch with me.  I was big into triple decker sandwiches.  Then she'd leave and I'd turn on the radio and nap.  I would wake up later in time to watch "The Merv Griffin Show," and then my mother would show up for the second round of sitz baths, make me dinner, and leave.  I would watch t.v. again.  I especially remember watching "An American Family" on PBS and being enthralled.  The Loud Family, episode after episode.  I didn't know the show was in color until a few years ago, I think.  I'm sure I watched the staples, too, "All in the Family," "Bob Newhart," and the NBC quintuplet of mystery shows including "Columbo."

People would drop by to see me occasionally, but as I say, I was on the outskirts of town and it was a hike to get to me.  One girl from school came by often, though, and I guess I was grateful.  Eventually, I was healed enough to begin sitting for short periods of time, and I realized that I would have to take her out.  I didn't want to.  She was o.k. for in the house, I thought, but I didn't want to be tied to her.  I realized I was a louse.  She was sweet and we ended up dating for seven years.  But that is another story.

When I was able to leave the house, I really couldn't.  None of my pants fit.  Something happens to you when you lie in bed and eat for months.  Your arms grow slim and your belly swells.  I couldn't get into any of my pants.  My waistline was atrocious.  I had put on five inches in girth.  I was horrified.  I went out and bought a bench and some weights and put them in the living room. That became my gym.  I had never worked out with weights before, or very little, so I followed the instructions that came with it.  Funny, but this was in the days prior to gyms.  Only certain kinds of people lifted weights, and they weren't normal, or so it was said.

Once I could get up, I would go lie by the pool in the late afternoons.  I'd never had a pool before, so it was something exotic and romantic to me.  I would go before people got off work, around two-thirty or three, and there wouldn't be anyone there, or, occaissionaly, some women a little older than I.  I felt sophisticated.

Eventually, I was able to return to school but I could not leave town as I was still under the doctor's care.  So for a few months, I went to the local university.  Each day, I'd drive home past one of the two topless bars in town.  One day, I got nerve enough to stop.  It was scary.  It was a mistake.

Eventually, I was healed and ready to go to the university town a couple hours to the north.  No more mom.  No more dad.  Just a skinny hippie headed for a hippie town.

One Sunday afternoon, I rented a U-Haul trailer and put my few belongings in it.  My mom and dad and new girlfriend came over to help.  I said goodbye to my parents, and then it was just me and my girl.  We would see each other on the weekends, we said.  She cried and it broke my heart.  And then I got into my car and headed north, the highway, the darkness, the headlights, the unknown. . . . 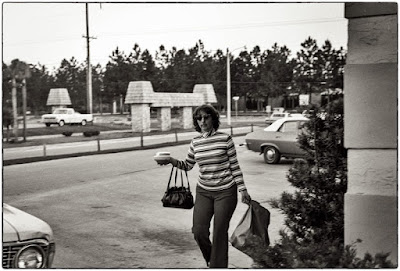 Footnotes:  I used that camera throughout college and beyond.  I used it in all my photography classes, and I used it afterwards when I did my three month trip around the country.  When I came back to the university and showed the pictures, my profs were wowed.  You don't need a bunch of great equipment to make good pictures.  This is my mother in 1973.  That is my two-toned Chevy Nova in the background.  The film must have been developed at the drugstore.  The negatives are very flat and without contrast.  I've done my best to punch them up here, but. . . .