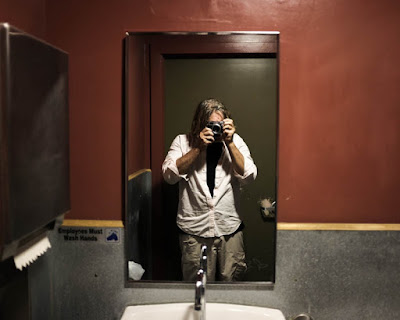 This year in Santa Fe.  Jeez.  Still doing the same picture.  Whatever.

My weekend went as planned.  The weather forecast turned out to be wrong enough that the trip to Miami would have been a good-enough one.  I mean, the workshop would have been good.  But I stayed at home and moped, as predicted, probably in a much deeper and more meaningful way than even I had expected.  I didn't eat as much junk food as I thought, but that is because I didn't eat much at all.  I DID buy some Ruffles Potato Chips, though, and some French Onion Dip, and I bought a cherry coffee cake, too.  I ate half of the chips and half of the dip, but not so much of the coffee cake. I ate some mac and cheese with tuna in it Saturday and only ate dinner with my mother yesterday.  I don't think I drank as much as usual, though I may be mistaken.  I went to the gym and showered and scanned old photos, and yesterday late in the afternoon before I went to dinner, I made myself go out with a film camera and take a roll of film.  My mother and I watched "Harvey" at dinner, and I wished I had a pooka, too.  James Stewart is wonderful as the "rum pot" who has given up on reality.

"Well, I've wrestled with reality for thirty- five years, Doctor, and I'm happy to state I finally won out over it."

I didn't know where I was going when I left the house with my camera.  I drove toward the city.  I tried going on the scooter, but it was no good, far too cold, and I turned around within a few miles.  Parking a car in the city near anyplace you want to go is perfectly impossible, but I had hopes on a Sunday afternoon.  Not high hopes, you know, but hopes.  On the way, however, I drove by a big block party/street fair.  I immediately thought of a Bill Burr bit, but I stopped anyway.  I had watched a Joel Meyerowitz documentary the night before, and was all about using my camera in a certain way, more direct, more composed, so I took my little Leica CL with a 28mm lens.  Get close.  Put the camera to my eye.  And I did.  Sort of.  At least some.  I walked through the crowd of old freaks and hipsters past their prime, not really worried about what they would think of an old guy with a camera.  Some people smiled.  I felt an authority, of sorts, as if I had been summoned there for the purpose.  I went through the roll of 36 exposures in nothing flat.  I looked in my camera bag, and much to my chagrin, I didn't have another roll of film.  I did have, though, my little Fuji X100, and so I took it for a little spin, too.

I was home within the hour, and since I had a little time before going to my mother's, I decided to develop the film.  When I hung them up to dry, I scrolled through the images.  Disappointing, of course, and I wondered one more time why I bothered.  It is so much easier to shoot digitally.

And why bother even doing that?  I am starting to wonder about myself and my sense of purpose.  Again, I am carving ducks in the garage, collecting old coins and rare stamps.  I mean, I could be watching t.v. news obsessively like the President.

After dinner with my mother, I came home and cut the negatives and scanned them in their holder to make proof sheets.  Then I poured a scotch and sat down on the couch and watched two episodes of "Downton Abbey" for comfort.  Hmm.

I like what the "hoax artist" Zardulu reportedly said: “Deep down, we don’t care about the truth. We want myth. We want our feelings and emotions to be represented in symbolic forms.”